From the Wombat's In The Mailbox: 06.22.22, John Hinderacker at Power Line thinks Biden Is Doomed and Has Nowhere to Run. Run? He can barely walk.

For now, the Democrats are trying to ride out the midterms as best they can. Once the election is behind us, I think they will try to figure out what to do with Biden. Persuade him to resign for reasons of health? Remove him under the 25th Amendment? Hope he survives long enough to complete his term and find someone else for 2024? The last option is probably most likely, unless Biden’s dementia deteriorates to the point that continuation in office is untenable–a point that may not be far off.

Ed Brodow at Am Think thinks of Five Reasons to Impeach Joe Biden, besides the obvious one, revenge. Even on Da Hill, Biden can​​’t escape questions on his age. And his designated heir? WaEx notes Joy Reid blames 'white and male media' for Harris’s dismal approval rating. It couldn't just be that she's a dismal politician with an empty head.

Speaking of which, all the buzz is about former Democrat star Andrew Gillum. From the Wombat's In The Mailbox: 06.22.22, Nice Deb at Am Great, Florida Dem Andrew Gillum Charged With Campaign Fraud; False Statements. Althouse reads the NYT which admits "Andrew Gillum, the Democrat who lost the 2018 Florida governor’s race to Ron DeSantis, surrendered to federal authorities in Tallahassee on Wednesday ..." ""... after he and a close associate were charged with conspiracy and 19 counts of fraud over how they raised and used funds when he was mayor of Tallahassee and a candidate for governor. He pleaded not guilty in a court appearance on Wednesday afternoon."

From the comments, " — only to lose his political direction and face personal struggles." Strange way of saying he was found in a hotel room doing coke with a male escort, plus skimming campaign contributions with his campaign manager. Florida dodged bullet with this one."  Capt. Ed at Haut Hair, Whoa: Gillum faces 21-count federal indictment for "campaign finance-related" fraud. Sundance at CTH, Former DNC Rising Star, Florida Gubernatorial Candidate and CNN Contributor Andrew Gillum, Indicted on Federal Fraud and Conspiracy Charges. Ace, Noted Motel Messer Andrew Gillum Indicted for Fraudulently Diverting Campaign Donations For Personal Use, Making False Statements, and Conspiracy. "He's currently running for a House seat. But it looks like he's sh** the motel room bed. Again." While on the theme of criminal Democrats, Fox reports Michael Avenatti’s remaining charges likely to be dropped following guilty plea to wire, tax fraud. CNN sure knows how to pick 'em.

AllahPundit at Haut Hair, Earthquake: DeSantis leads Trump in primary poll of New Hampshire Republicans, "I doubt there’s been a poll published in the last five years that will frighten and anger Trump as much as this one."

Allah again, Last night's big winner: Ron DeSantis? "Yes, this is now officially a running joke on the site following Republican primaries. But I do think it’s true about last night’s results, and not just for the usual reason of Trump’s endorsees underperforming." The WaPoo whines Republicans could hold key to 2024 Democratic nomination calendar, "Democratic plans to sidestep Iowa are complicated by the need for GOP agreement to move Michigan or Minnesota to the front of the line." 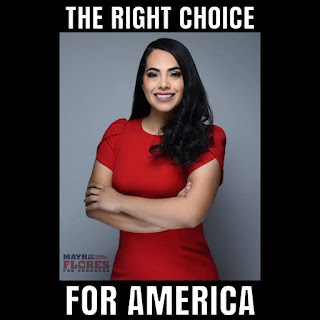 ET reports Republican Mayra Flores Sworn In as First Mexican-Born Congresswoman. ADN America, Mayra Flores sworn in, sets record as first Mexican-born woman in Congress. CNN whines Democrats are losing ground with the fastest-growing political bloc: Asian Americans. CNN's Chris Cillizza thinks he knows The secret of why evangelicals love Herschel Walker (and Donald Trump), although why he would understand Trump voters is beyond me. AllahPundit, Dr. Oz is in serious trouble in Pennsylvania

"He’s not doomed, for the simple reason that no Republican is doomed in a year like this one unless they’re running in a D+15 jurisdiction. Pennsylvania is considerably redder than that. Oz will have a fighting chance all the way to Election Day." 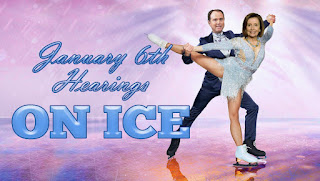 'Bonchie' at Red State says The January 6th Hearings Are in Limbo Again for a Laughable Reason, to which the Babylon Bee clowns Democrats Announce 'January 6th Hearings On Ice'. "The show will take place on a rink of frozen tears supplied by AOC herself, and will feature the talents of Liz Cheney, Adam Kinzinger, and Adam Schiff, as he comically attempts to stay upright under the weight of his large watermelon-shaped head."

From the Wombat's In The Mailbox: 06.22.22, at Twitchy Two Democrats Admit “Nobody Gives A F*** About January 6” and Hollywood In Toto Ryan Long, Danny Polishchuk Mock Low-Rated Jan. 6 Hearings. At NYPo, Majority of Americans didn’t watch Jan. 6 panel’s hearings last week. Anxious anxiously cites Raffensperger who says he wishes Fox News carried every Jan. 6 hearing. Nick Arama at Red State, thinks a New Poll and Congressional Dems Sweep the Leg out From Under J6 Committee. On the other hand, the Punchbowl thinks the J6 committee is being effective. AllahPundit finds it Unbelievable: Sure, I'd vote for Trump again in 2024, says ... Rusty Bowers, the J6 committees recent "star" witness. Hey, at least he's not a Democrat. They're worse. From the Bulwark Girlz, The Good Coup, "Peter Navarro had a perfectly legal strategy to overturn the 2020 election. And he would have gotten away with it, too, if it weren't for those meddling insurrectionists." Lloyd Billingsley at Front Page, Barr Hits Bottom "Former AG backs the Democrats’ Jan. 6 show trial."

Stacy McCain Guess Who Is Lying Again? "More blatant dishonesty from our alleged president. . . " Cutie Pavlich at Town Hall, White House Press Secretary Has a 'Freudian Slip' About the Impact of Biden's Policies.  At Bongino, Karine Jean-Pierre Freudian Slip: Biden Working to "Elevate" Pain at the Gas Pump. She's not very good, but she's more fun than Psaki. At PM, Biden calls on Congress to suspend federal gas tax for summer months. $0.18 per gallon. Whoopee! From the Wombat's In The Mailbox: 06.22.22, the Victory Girls see  Biden Calls For Three Month Gas Tax Holiday. Oh Joy!. Sundance at CTH, Sanctimonious Biden Demands Congress and States Suspend Gasoline Taxes to Offset Massive Increases His Energy Policy Has Created "… And if they don’t, they are Russian sympathizers." Ace, Lyin' Biden Proposes Suspending the Federal Gas Tax, and Urges States to Cut State Gas Taxes, But Proposes Nothing to Increase Supply; Claims He's Producing More Oil Than Trump, and Claims Only the War in Ukraine Has Caused Increase in Gas Prices, "He's calling for suspending the federal gas tax, and demanding that states cut the gas tax too, or "find some other ways to deliver some relief." Even Obama called it a gimmick. At Fox, Biden looks everywhere to lower gas prices — except boosting oil production, "Biden admin 'pursuing this green agenda at all costs,' executive director of energy group Power The Future tells Fox News Digital." KT at Haut Hair, Biden: Hey, that Chevron guy sure is sensitive, isn't he? Also at Haut Hair Jazz Shaw wonders Did the Russians attack a Texas energy plant? Possibly, but probably not.

From the Wombat's In The Mailbox: 06.22.22, Weasel Zippers: Good News! WH Says They “Don’t See A Recession” Happening,   At PM, White House states US is 'not in a recession right now' as inflation woes continue. Actually, like Schrödinger's cat, we don't know if we're in a recession or not. If another quarter comes in negative, we will have been in a recession. At ET, Powell Says Recession ‘Certainly a Possibility’ as Fed Is Determined to Hike Rates to Tame Inflation. Sundance, Fed Chairman Jerome Powell Admits It Is Not Russia That Created U.S. Inflation, It Is Joe Biden Policy. Virginia Kruta at Da Wire, Elon Musk Splits With Biden Advisers, Says ‘Recession Is Inevitable’. From the Wombat's In The Mailbox: 06.22.22, Don Surber: The Crash Is Coming – 10% Unemployment Possible. More from Sundance, Build Back Better Inflation Hits 7.7 Percent in Canada and 9.1 Percent in U.K., JPMorgan Chase Cuts Thousands of Positions in Mortgage Lending Sector and Tech and Finance Sector Reversing Job Offers for College Grads. Bloomie, Recession-Fearing Bosses Quietly Abandon Open Jobs.

KT reports Biden administration to import baby formula from Mexico. Will it have a worm in the bottom of the bottle? Paul Bedard at WaEx reports DeVos claiming Biden buying off voters with student loan pardon. That's obvious.

Twitchy catches a Trans doctor says trans rugby player is ‘now at a physical advantage’ compared to her female teammates. No shit! Kevin Downey at PJ Media, Woke Wednesday! Sit Down, Rapinoe. A Man Is Speaking (up for Women). At OutKick, Lia Thomas Described as 'Mentally Ill' by UPenn Teammate. Althouse reads the NYT, "I propose a New Deal for women’s sports — with a women-first approach." "
Writes Lindsay Crouse in "We Can Do Better Than Title IX" (NYT)."

This must go beyond creating entitlements and enforcing parity, as Title IX does. We must dismantle the grandfathered-in systemic advantages that male athletes and male-dominated sports infrastructures continue to enjoy. We must cultivate tastes for other sports, the ones that women excel in and even dominate. And we must broaden our definition of what athletic prowess looks like....

A Buttigieg butthurt, on Da Hill, Chasten Buttigieg knocks Boebert after her ‘shoutout’ to America’s dads, "Boebert was among the Transportation secretary’s toughest critics, accusing him in a November YouTube video of “not working” because he was “trying to figure out how to chest feed.”" Insty, OUT WITH “BREASTFEEDING,” IN WITH “CHESTFEEDING”: It’s the new, inclusive way to talk about the thing that “birthing people” do for babies. A new bill in the Massachusetts legislature, which will fund “doulas” for pregnant Medicaid recipients, uses that term.

Athena Thorne at PJ Media reports on how SpaceX Straight-up Fires Woke Activist Employees "Sorry, wokesters — looks like SpaceX will stay focused on its actual mission, rather than becoming yet another zombie company that vaguely resembles its namesake but is actually a soulless corpse animated only by Marxism." Also at PJ Media Stephen Kruiser says Elon Musk Is the Boss All Woke Losers Need.

Ace, Disney's Stock Price Has Lost 50% of Its Value After Year of Leftwing Political Electioneering and Badly-Received Woke Programming, "The Mouse that squeaked. Get woke, go broke."

The Wombat has Rule 5 Sunday: Eugenie Bouchard and FMJRA 2.0: Synphaera up on time and under budget at The Other McCain.