Haut Hair reads the NYT, Biden irked by Dems who won't take "yes" for an answer on 2024 "Mr. Biden has been eager for signs of loyalty — and they have been few and far between." Dave Drehle at WaPoo opines Ron DeSantis’s snub of Trump is a 2024 challenge, "The first rule of bar fighters, so I am told, is: Always land the first punch." Kyle Smith at NYPo reports CNN gives Kamala Harris the easiest layup — and she still misses

At RCP,  More Than 1M Voters Switch to GOP in Warning for Dems. "over the last year, roughly two-thirds of the 1.7 million voters who changed their party affiliation shifted to the Republican Party. In all, more than 1 million people became Republicans compared to about 630,000 who became Democrats." Capt. Ed chortles about The Million Voter March: Guess who's winning the party-switching sweepstakes this cycle?. Eric Lendrum at Am Great, Over One Million Voters Switch From Democrat to Republican Ahead of Midterms. At the Wa Free Bee, Blue Exodus: More Than a Million Democrats Switch to Republican Party, "Republicans win back suburban voters." Ace, Walk Away: One Million Voters Flip From D to R Nationally, Some suburban Karens are getting a little freaked out by how freaky-deaky the Democrat Party has become, reports AP. Althouse, more in sorrow than in anger, "More than 1 million voters across 43 states have switched to the Republican Party over the last year...". At NYPo, Democrats cater to the woke at their electoral peril.

At NR (cited at Haut Hair), the sometimes readable Kevin Williamson asks Will Dobbs matter in November?  He seems to think it's not as big as they hope. I agree. Haut Hair also cites the NYT, The ruling was just the beginning: Both sides mobilize over abortion. Anxious anxiously warns Democrats bet on Roe's ballot power. AllaPundit at Haut Hair  pleased as punch that in a Post-Roe NPR poll: Dems surge to seven-point lead on generic ballot, but he is honest enough to point out it leaned heavily Democrat before the ruling. "Ed reminds me that NPR’s polling also found Biden enjoying a huge eight-point bounce in job approval after the State of the Union in March. How has that worked out?" PJ Media's Stacey Lennox reports Allen West Says Dobbs Won't Prevent a Red Wave in November. Chris Queen at PJ Media, issues a Red Wave Watch, and I issue a counting chickens warning.

Sundance at CTH is unhappy about A Combative Interview Between Bret Baier and Arizona Governor Candidate Kari Lake, Video. All politicians deserve tough interviews. At the Wa Free Bee, ‘Desperate’: Democrat Who’s Been in Congress Since 1983 Goes After ‘People in Washington,’ "Ohio's Marcy Kaptur distances herself from D.C. after serving for nearly four decades." Did she get a far out of town as Germantown? Also, Illinois Dem Releases Comically Bad Campaign Ad, "This is the worst political ad I've ever seen." 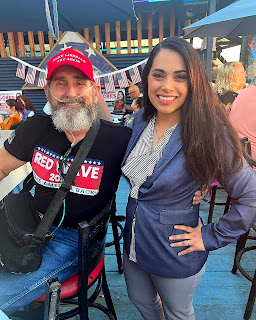 Nick Arama at Red State thinks Pelosi's Response About Pushing Mayra Flores' Daughter Makes It Worse. She claims she was pushing her out "into the picture." Virginia Kruta at Da Wire reports on how Mayra Flores Responds To Video Of Pelosi Elbowing Her Daughter “I am so proud of my strong, beautiful daughter for not allowing this to faze her. She continued to smile and pose for the picture like a Queen. No child should be pushed to the side for a photo op. PERIOD!!” Sundance, Daughter of Mayra Flores Stands Her Ground After Shove from Nancy Pelosi. Lou Aguilar at Am Spec takes on Latinos Versus the Demoncrats, "An exorcism might be in order for the Democrat party."

In J6 Committee "news", CNN reports on what they hope to be riveting new drama, Former Meadows aide will testify before January 6 committee on Tuesday, sources say. Breitbart, Jan. 6 panel calls surprise hearing to present new evidence. At Twitchy, Dan Rather calls the suspense behind today’s surprise January 6 witness a ‘who shot J.R.?’ moment. Who did shoot JR, does anyone remember, or care? Apparently she will claim that several Trumpies sought or at least considered getting pre-emptive pardons. Rep. Andy Biggs at HE, Media Inflation Surrounding the January 6 Committee Distracts Americans From Democrats’ Failures.

At Am Great, Lloyd Billingsley calls it More Than a Stalinist Show Trial "Beyond the January 6 committee hearings, Stalinism advances on other fronts. . . . Stalin aimed to eliminate his rivals, and the January 6 session targets Donald Trump, first and foremost." At Breitbart, Raskin: ‘Not My Principle Interest’ Trump Criminally Charged. Kenneth R. Timmerman at Am Think, Gaslighting Committee Attempts Launch of Banana Republic. The redoubtable Julie Kelly at Am Great warns the January 6 Committee Ignores Key Questions About FBI. "Jeffrey Rosen and current Justice Department officials do not want Americans to know about the agency’s deep involvement in the events of January 6." At CNN, John Eastman searched and had phone seized by federal agents last week, he says

Last Wednesday, about six federal investigators approached Eastman in New Mexico when he was exiting a restaurant after dinner with his wife and a friend, according to the court filings. He was patted down, and "forced to provide [facial] biometric data to open" the phone, Eastman's court filing said.

Agents were able to get access to Eastman's email accounts on his iPhone 12 Pro, the filings said.

In court papers seeking the return of his phone, Eastman argues that because he was never a Justice Department employee, he is “outside of the OIG’s jurisdiction.”

The court papers say that when Eastman asked to see the warrant, the request was refused. He was frisked, his iPhone taken from him, and he was “forced to provide biometric data to open” the phone, the filing says.

That claim may become a matter of dispute, since the warrant for his phone explicitly states that he may be asked to willingly provide a password or biometric data but cannot be forced to provide that information.

WaPoo whines They backed a Jan. 6 commission. Now, they face heat in GOP primaries. "Next test comes Tuesday, when five of 35 House Republicans who voted for commission will be on ballot" Matt Margolis at PJ Media Liz Cheney Gets a Rude Awakening, when she finds her role on the J6 Com won't counteract her support for Dobbs with the Democrats and the media (but I redund). AllahPundit fears, The big winner from the January 6 hearings: Ron DeSantis?. Whipping a dead horse, I&I reports Pelosi Readies New Articles of Impeachment Against Trump, Says ‘Third Time’s The Charm’

Althouse, "We’re never going to be the ones to cross the police barrier or cross something in order to get to somebody."

Said Enrique Tarrio, the chairman of Proud Boys, in a recorded video conference on Dec. 30, 2020, quoted in "Proud Boys Ignored Orders Given at Pre-Jan. 6 Meeting/The directives, given during a video conference, included obeying police lines and keeping away from ordinary protesters. But members of the far-right group played aggressive roles in several breaches at the Capitol" (NYT).

Lawyers for the Proud Boys say the recorded meeting is a key piece of exculpatory evidence, contradicting claims by the government that a conspiracy to attack the Capitol was hatched several weeks before Jan. 6.

In court filings, prosecutors have claimed that the Proud Boys began to plan their assault as early as Dec. 19, 2020 — the day that President Donald J. Trump posted a tweet announcing his Jan. 6 rally and saying it would be “wild.” But the video conference shows that, just one week before the event, when Mr. Tarrio and other Proud Boys leaders gathered their team for a meeting, they spent most of their time discussing things like staying away from alcohol and women and taking measures to ensure their own security....

Ace, Seventy-Two Hours Later, and The Left is Still Reacting Perfectly Calmly and Normally to the Dobbs Decision. Paul Krause at Am Think thinks The Left-wing Insurrection Intensifies. At Da Wire, In The Wake Of Roe v. Wade, Attacks On Churches, Pregnancy Centers Escalate. "Data compiled by the Susan B. Anthony List and CatholicVote has found that dozens of centers have been attacked since the the early May leak of a draft Supreme Court opinion indicating that Roe v. Wade might be overturned." Breitbart has PHOTOS: Christian Pregnancy Center in Colorado Set on Fire After Roe v. Wade Decision. Breitbart, Pro-Abortion Protesters Arrested in Oregon for ‘Night of Rage’ Violence. Forget it Jake, it's Portland. KT at Haut Hair, Rudy Giuliani assaulted in New York grocery store, worker arrested. Bob Spencer at PJ Media, Leftist Assaults Rudy Giuliani in Grocery Store, Claiming He’s ‘Gonna Kill Women.’ At Wa Free Bee a Transgender Activist Who Created ‘Gender Unicorn’ Calls for ‘Supreme Court Assassination Challenge’. From the Wombat's In The Mailbox:  06.27.22, EBL, Democrat Days Of Rage and Louder With Crowder notes Leftists Call for a ‘Sex Strike’ in the Wake of Dobbs, Totally Miss the Irony, and Leftists Cry Bloody Murders After a Man Drives Truck Through Protest, no one hurt.  At Da Caller, Patagonia To Bail Out Employees Arrested At Pro-Abortion Protests. PJ Media's Stephen Kruiser says  Unhinged Abortion Left Should Probably Focus on Mental Health Care for a While, their own. John Hinderacker at Power Line wonders Why the Abortion Hysteria?

This is perhaps the dominant fact of 21st Century politics. Liberals don’t want to debate, they don’t want to persuade. They want to censor. They want some higher authority, whether the Supreme Court, Twitter, or corporate America, to declare all views but theirs out of bounds. They don’t want to participate in democratic politics, they want to rule by fiat. For all their wailing about “our democracy,” the last thing liberals want is the actual give and take of a democracy, which usually entails compromise.

And in the interest of getting on with life, DIY on the Stupid Biden Economy:

Just How Bad Is the Economy Really? - American Thinker
Powell’s path to 2% inflation needs luck or, failing that, pain: 'We can’t afford to be fooled again on this, or else it’s going to get beyond us' | Fortune
US is already in a 'soft' recession: Economist Stephen Moore | Fox Business
Most Americans Are 'Concerned' About Their Ability to Afford 'Day to Day Things'
The Middle Class Needs to Start Thinking About Asset Protection - American Thinker
Last Year, Biden Bragged About 16 Cents In Fourth Of July Cookout Savings. This Year, Prices Rose By Double Digits. | The Daily Wire
Gavin Newsom, Democrats to Send Cash to California Residents to Buy Gas
‘Ten Policies to Unleash American Energy and Fuel Recovery’ (API gets nine of ten right) – Watts Up With That?
Shortages of Neon, Other Rare Gases Likely in Wake of Russia Limiting Exports
And the Culture Wars:
Adult Biological Man Beats Teenage Girl To Win Women’s Skateboarding Contest
The Groomer ‘Panic’ Is a Hill Worth Dying On › American Greatness
What Do 'Men Give Birth' and 'Defund the Police' Have in Common? - FrontpageMag
A Gay Activist Group Gave Free Bus Tickets to Minorities and Trans People. It Likely Violated Civil Rights Law.
Biden Official Levine: Sex Reassignment Surgery Is “Life-Saving” And “Medically Necessary” For Kids… - Weasel Zippers
Pennsylvania Drag Queen Arrested and Charged With Possessing Child Pornography – Summit News
Twitter Says Calls to Kill Thomas Don't Violate Their Rules – PJ Media
Stop the 'Ministry of Truth' (Again) - The Pipeline
Anti-Semitic death threats found on Lee Zeldin lawn sign
‘You’re Not My Lawyer’: Bill Maher Breaks Down Exactly Why Americans Are Fleeing The Left - The Daily Wire
Companies That Vow To Cover Abortion Travel Costs Silent On Helping Mothers Pay For Baby Formula - The Daily Caller
'Top Gun' Hits Over $1 Billion, and the Left is Going Nuts – PJ Media
Ace of Spades HQ The Morning Rant: Is There An Emerging Trend of Small Businesses “Canceling” Woke Corporations Because Of ESG Requirements?
Posted by Fritz at 12:26 PM