The liberals, Democrats and media are taking Friday's (fully expected) announcement of the overturning of Roe v. Wade by the Supreme Court about as a well as we might have expected. Stacy McCain reports on  A Mostly Peaceful Insurrection: Deranged Pro-Abortion Mob Storms AZ Capitol and hold legislators hostage. I expect the FBI will rounding them all up shortly. /sarc

Were they incited by Joe Biden’s extremist speech? Obviously, Republicans in Arizona will have to convene a J24 investigation to get to the root of this CONSPIRACY TO OVERTHROW DEMOCRACY!

I don’t know how I’ll be able to look at my son and explain June 24 and how close we came to losing our democracy. Some scars never heal. #June24th https://t.co/QlwPET6nef

But though Biden urged protesters to be “peaceful, peaceful, peaceful” and proclaimed that “threats and intimidation are not speech,” what he still did not do is expressly condemn the actions of 26-year-old Nicholas John Roske, who was arrested in the early morning hours of June 8th after an admitted attempt at assassinating Justice Brett Kavanaugh ahead of today’s ruling. Nor did he expressly condemn the acts of intimidation and violence by pro-abortion radicals that have taken place in churches and at pro-life centers across the country over the last couple of months.

PM reports Rioter attacks police with homemade flamethrower at pro-abortion Antifa riot in LA and Antifa starts fire outside Portland courthouse still under protective barrier from BLM riots. Pretty sure I won't find these in this mornings WaPoo. At NYPo, Abortion protesters swarm conservative SCOTUS justices’ homes. It's only a federal crime, but it won't be enforced. Not until some one dares to protest outside of Kagan, Sotomayor or Breyer's house. At Fox, Far-left radicals find targets using UGA professors' map of pro-life clinic addresses, "Crisis pregnancy centers targeted in wave of violence over Supreme Court abortion decision." From Da Mail, Christian pregnancy clinic in Colorado is torched and graffitied with the words 'if abortions aren't safe, neither are you' after pro-abortion extremists warned of 'night of rage' following Roe v. Wade decision. Sounds like a conspiracy to me.

The Wa Free Bee want you to Read Democrats’ Most Unhinged Reactions to Roe’s Reversal:  ‘Illegitimate’. But why not stop by Twitchy where you and see them on video at CRAZY thread of CRAZIER Lefties proves the REAL danger in America is frothy-mouthed nut-jobs losing their MINDS over Roe, with special attention to Here’s a woman either upset over Supreme Court’s decision or resisting an exorcism

Are these people okay? pic.twitter.com/BTBvR9BtZc

At Da Wire, ‘The Five’ Host Says If Sen. Cruz’s Daughters Were Raped, She Finds It ‘Hard To Believe’ He ‘Wouldn’t Do Everything In His Power’ To Get Baby Aborted. The "reasonable" liberal. God how I miss Bob Beckel. Stacy Lennox at PJ Media notes Could AOC Be Getting a Little 'Insurrectiony' With Her New Revolutionary Friend? No enemies on the left.


Note the accommodating woman on her left who is providing the perfectly coiffed elitist playing revolutionary, AOC, with a megaphone. As the Congresswoman grins like this is all good performative fun, she may not realize she is standing next to a radical Communist organizer named Sunsara Taylor.

Taylor is a self-proclaimed member of the Revolutionist Communist Party (REVCOM), which calls for “extremely violent means” to protect abortion rights. She claims she is a follower of Bob Avakian, a REVCOM founder who has called for violent revolution and overthrow of the existing U.S. government for decades.

Stacy McCain, Meanwhile . . . "Why is the Biden administration persecuting an innocent black man?"

Alexander did not respond to questions at the courthouse. He has not been charged with any crime. He acknowledged his testimony in a social media post on Friday. “Today a DC grand jury brought me in under subpoena and the threat of imprisonment. I told them I committed no crimes and observed no one committing any crimes during the 2020 Election and January 6th,” he wrote on the Trump-founded site Truth Social.

“The calm confidence of a Christian holding four aces.”

A retired Texas couple said FBI agents busted through the gate of their rural home, threw flashbangs, handcuffed them, and trained lasers on them before searching their home for evidence connected to the Jan. 6 breach of the Capitol.

Lora DeWolfe and Darrel Kennemer, who live on seven acres near San Marcos, Texas, told The Epoch Times they attended the Jan. 6 rally at the Capitol but did nothing wrong. They believe the FBI mistakenly identified Kennemer as someone else.

The FBI didn’t arrest them, they said. Agents eventually produced a search warrant saying Kennemer was suspected of “assaulting, resisting or impeding” officers and “entering restricted building or grounds.”

Both said they went no further than the Capitol steps on Jan. 6 and did not harm anyone or damage anything. They said the allegation of assault was false, and the FBI kept showing Kennemer a blurry photo of a man who looked similar but wasn’t Kennemer.

Meanwhile, the Gateway Pundit wants to direct your attention to the question  WHO IS RACHEL POWELL? She Used an Ice Axe and Battering Ram To Break Into Capitol Windows on Jan 6… She Gave ‘Specific’ Directions To People Inside Capitol About How To Navigate… Why Is She Only on House Arrest?  Was she part of Epps coterie?

More sign of political unrest, this time aimed at Joe Biden, at the Cook Political Report, Can Democrats “Break Away” From an Unpopular President? You broke it, you bought it. Paul Bedard at WaEx's White House Report Card: Biden could get bounce from Dobbs. I'm not so sure, if you really like abortion, you certainly voted Democrat, and you're likely to be fairly reliable. I'm sure they'll fund raise off it, though. At the Intelligencer (cited at Haut Hair) Ben Jacobs fears GOP insiders doubt Dobbs will hurt them in the midterms, “Democrats are going to overplay their hand,” one well-connected Republican predicted, “they overplay every hand they get.” The Republican thought, for instance, that “there’s going to be violence and [Democrats are] not going to denounce the violence.” So far, that's correct. Joh Solomon at JTN, Sarah Palin fires on Washington: 'Biden is so clueless,' GOP can't wait for 'red wave' to act. At NR, DeSantis Leads Trump in 2024 New Hampshire Primary, General Election Polls. I'm not shocked, but it takes more the New Hampshire. 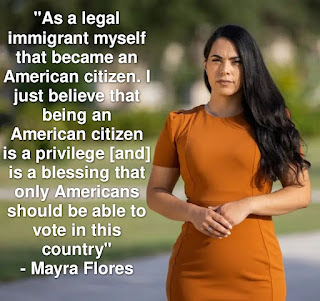 At NYPo, Salena Zito explains why she thinks  Mexican-born Rep. Mayra Flores is the future of the Republican party

Flores’ remarkable victory is reminiscent of the 2010 red wave, when Republican House candidates in the Rust Belt states of Ohio, Michigan, Wisconsin and Pennsylvania swept seats that Democrats had held for generations. The media and the Democratic Party never expected Hispanics to vote Republican in the same way they never expected legacy blue-collar Democrats to flip parties in the 2010 and 2014 midterms. But they did.

Breitbart catches Bill Maher saying another uncomfortable thing to Democrats, Hispanic Voters in TX Telling Dems to Advocate for Them Not ‘Migrants Showing up in My Backyard’

Another from Paul Bedard, Most agree: No more ‘Zuckerbucks’. " In the survey from the Foundation for Government Accountability’s Center for Excellence in Polling, 80% of Republicans, 85% of Democrats, and 83% of independents opposed outside funding like that in the so-called Zuckerbucks scandal." Democrat's want to quit while they're still ahead for fear Elon Musk will out spend the Zuck.

On the economy, Capt. Ed at Haut Hair calls Biden Out of gas: Biden loses Dems on gas-tax holiday. Damn, I really needed that 18 cents.  And calls out KJP: Putin's war added $2 per gallon to the price of gas, you know. "That’s not just false, but it’s laughably false, and not just on price. . ."  That's racist!  NYPo reports on how Amid record gas prices, Biden snubs oil CEOs for wind execs. Wind bag. Sundance at CTH  reports how Ahead of G7 Germany asks for Urgent Discussion on Inflation, Climate Policy and Worsening Energy Crisis and  foresees Retailers Preparing for Recessionary Drop in Spending, Many Outlets Will Not Survive… At Pirate's Cove, Teach teaches Consumer Sentiment Falls To Lowest Level Ever.

Truly an astonishing case, at NYPO, Transgender ex-neo-Nazi bank robber, 63, will get 'gender surgeries' fast-tracked by Texas Bureau of Prisons after she filed lawsuit against the agency over delays. Sentenced to life + 35, I like Tyrus' response on "The Five," Only after he serves his sentence. Shockingly, Newsweek allows Pedro Gonzalez to opine Whether We Say It or Not, Our Culture Provides Cover for Groomers. At the Wa Free Bee, Rhode Island Democrats Split Over Bill That Criminalizes Sex Between Teachers and Children. The pedo lobby in action. At Common Sense They Questioned Gender-Affirming Care. Then Their Kids Were Kicked Out of School.

A few weeks later, one of Charlotte’s teachers asked the kids to introduce their stuffed animals with their pronouns. “The six-year-olds were like, ‘What’s a pronoun?’” Beka said.

A former MCDS teacher whose daughter attended the school said his little girl was similarly confused when MCDS “started introducing gender, and you can be whoever you want, and it’s fluid. She started taking that on.”

“You could see the old going away,” the former teacher said. “It was intense. And it was just sobering to go to these meetings week after week after week, and just talk about the same thing over and over.”

To be sure, they should have take their kids out of this private school long before it got to this point.

At Am Mil News, US Navy says it’ll punish sailors who misuse gender pronouns intentionally. I'm glad they've fixed all their bigger problems, like their ships running into slow freighters or catching fire.

In a heavily stuffed post KT at Ace's wonders Where did Woke Business come from? What will happen to it?

Linked at as Blog of the Day at Pirate's Cove in today's If All You See…. Thanks, Teach!