From the Wombat's In The Mailbox: 06.06.22, Louder With Crowder: Biden Having Old Man Meltdowns Over Being More Unpopular Than Trump

Joe Biden, per Politico, is in a bad mood. Being the worst president ever can put you in a funk. It's even worse when, in what's left of your brain, you think it's not your fault that you are the worst president ever. It's the fault of everyone around you... that you hired. That's what Biden is going with, and the media is happy to help. Biden isn't failing. He is being failed. And it's for THAT reason that Biden is less popular than Donald Trump.

That's what really burns his biscuits.

"The president has expressed exasperation that his poll numbers have sunk below those of Donald Trump, whom Biden routinely refers to in private as 'the worst president' in history and an existential threat to the nation’s democracy."

Donald Trump, while a jerk who said mean things on Twitter, had a thriving economy until the pandemic. While Biden wants to take credit for the jobs coming back that were lost from the pandemic, the American people can see through that. There were no new wars under Trump. And also, thirteen service members weren't killed over Trump's botched evacuation of Afghanistan.

Matt Margolis at PJ Media, Awww: Joe Biden Is Angry That He’s Now More Unpopular Than Donald Trump. Stephen Kruiser at PJ, Biden Is Mad That Americans Are Noticing All of His Failure. Althouse, "Far more prone to salty language behind the scenes than popularly known, Biden also recently erupted over being kept out of the loop about the direness of the baby formula shortage..." Ace, Politico: Biden is Seething -- and Spewing Profanities -- That He's Less Popular Than Trump and Being Unfavorably Compared to Carter, "America is crippled by the Peter Principle.

Scott Johnson at Power Line on The Biden Ordeal "I assess that Joe Biden has no constructive policies offsetting the catastrophes he has wrought."  Summit News looks at an ABC Poll: Biden “Badly Under Water On All Of The Top Issues” “Biden is a serious drag on Democratic candidates nationwide” Breitbart calls it ‘Complete F*cking Chaos’: Establishment Media Lukewarm on Biden’s Potential Second Term. I'm sure they'll come around once Trump or DeSantis wins the nomination. At the Wa Free Bee, Poll: Under Joe Biden, Americans Are Losing Hope, "Americans are 'deeply pessimistic' about the economy, political divide, and the American dream."

Breitbart watches CNN’s Enten: Polling Shows GOP Will Take Huge House Majority –Best Position in over 80 Years.  "but my estimate for the 2023 House makeup, if the election were held today, which again, it isn’t, we still have five months, five months from tomorrow, would be Republicans, 236 seats to 241 seats. Democrats, 194 to 199." Matt Bai at WaPoo is preparing the troops for failure, Why losing the midterms isn’t the worst thing for Democrats. But Josh Marshall at NYT cited at Haut Hair thinks  Democrats can win this fall if they make one key promise, bust the filibuster and vote for universal abortion on demand. Joe Klein at Front Page thinks he's identified the next AOC, The Progressive Left’s Latest Shining Star, "Delivering the same woke snake oil in a new bottle." Mallory McMorrow of Michigan. She's she's cute and very ginger. I wonder what her pronouns are? From the Wombat's In The Mailbox: 06.06.22, Victory Girls  observe the Senate Race In Pennsylvania – Cardiac Doctor Vs. Cardiac Patient.
Nick Arama at Red State chortles at Hilarious Shot and Chaser Shows Unhinged RINOs Are About to Get Wiped in Primaries. At Althouse, "Former President Donald Trump is bored at Mar-a-Lago and anxious to get back in the political arena — as a candidate, not a kingmaker...". Steve McCann at Am Think thinks he knows why Why Donald Trump Should Not Run for President in 2024. "If Trump were to defeat the ruling elites a second time, their nihilist radical left-wing allies and their media sycophants would be consumed with uncontrolled vengeance." As opposed to now? At the Slantic Jennifer Senior calls Steve Bannon the American Rasputin, "Steve Bannon is still scheming. And he’s still a threat to democracy."
Chris Chantrill at Am Think compares The Week of Sussmann and Navarro. "But if an Inner Party chappie gets a free ride, and the Outer Party chappie gets leg irons, what is the fate of the Proles in Biden’s America? Hey, ruling class: you may not think about where this injustice leads, but I can." At CTH sundance hosts as Tucker Carlson and Peter Navarro Discuss the Two Tiered Justice System in Navarro’s First Interview Since His Politically Motivated Arrest.

Matt Margolis at PJ Media, There Was a Huge ‘Mistake’ in the 2020 Census… Guess Which Party It Favored? Also from the Wombat's In The Mailbox: 06.06.22, Weasel Zippers Hand Count Of Votes In DeKalb County Georgia Reveals Machines Were Off By Thousands & Gave Race To Democrat.
At NYPo, Elon Musk accuses Twitter of breaching contract over spam bots. At LI, Elon Musk Threatens to Terminate Twitter Deal if Company Isn’t Honest About Fake Accounts, "Musk also believes Twitter “is actively and thwarting his information rights.” Sundance, Elon Musk Threatens to Walk Away from Twitter Deal if the Social Media Company Does Not Provide Transparency on Bots and Spam Accounts. Capt. Ed at Haut Hair, BREAKING: Musk threatens to dump deal in letter to Twitter, SEC. "Time to play “Let’s Make a Deal,” or time to escape a deal?"
The redoubtable Julie Kelly on What the January 6 Committee Hearings Won’t Cover, "A sham congressional committee working with a corrupt Justice Department boosted by a dishonest national media can only be expected to create political propaganda." Truth.  At Twitchy, Rep. Jamie Raskin says the January 6 committee has found more evidence on Donald Trump than just ‘incitement’ Even AllahPundit at Haut Hair calls it Insanity: At least one Dem on Jan. 6 committee reportedly wants to recommend abolishing the electoral college. That would be Raskin. At the Week Liz Cheney say Kevin McCarthy has 'turned his back on the Constitution', while using her position to extort campaign funds, Liz Cheney Tries To Extract Campaign Cash From J6 Witness Subpoenaed By Her Committee (Tristan Justice at Da Fed). At Da Caller, Former ABC News President Who Quashed The Epstein Story To ‘Produce’ Democrats’ Jan 6 Hearings, so you know they're going to be totally honest. Breitbart, Exclusive — Rep. Elise Stefanik: GOP Ready to Provide Counter Programming to ‘Illegitimate’ January 6 Hearing
In the real insurrection, via the Wombat's In The Mailbox: 06.06.22, from Mike LaChance at LI, Molotov Cocktail Lawyers Plead Guilty to Reduced Charges, Likely Will Get Only Two-Year Sentences. Insty, IT’S GOOD TO BE THE NOMENKLATURA: "Jonathan Turley: New York Attorneys Accused of Firebombing Police Car Given Generous Plea Deal."

“Notably, Rahman and Mattis pleaded guilty last year to one count of possessing and making an explosive device, which carries a maximum sentence of 10 years in prison. Now, however, they will be allowed to withdraw the earlier plea and instead plead guilty to conspiring to assemble the Molotov cocktail and damage the New York Police Department patrol car. That is a nosebleed of a drop in the severity and punishment for this violent attack. It is a sharp contrast to the harsh position taken by the Biden Justice Department on many of those accused of rioting on January 6th. Attorney General Merrick Garland cited the threat to police officers in pledging an unprecedented effort to charge and convict those involved ‘on any level’ in the riot.”

Capt. Ed reads an ABC poll: 80% cite inflation as top issue -- and Biden gets 28% approval. NYPo, Americans say gas prices, economy will dictate midterm election votes. Sarah Hoyt at Insty, TONE DEAF PROPAGANDISTS:  New York Times Makes the Case for More Inflation. "If anyone tells you that inflation is a great opportunity to go vegan, whisper back “leftists are made of protein.”  It might wake them up." Bob Spencer at Front Page, Biden: The Economy Isn’t Bad, You Just Can’t See How Good It Is, "Maybe if we tilt our heads and squint " and David Harsanyi, say Yes, Biden Deserves Blame for Inflation, "From top to bottom, the administration is as wrong as any could be." 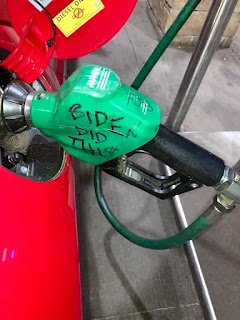 Sundance sees an NBC Report, National Avg Gasoline Prices Likely to Reach $6/Gal by Labor Day. Breitbart, California County Sees Average Gas Price Soar Above $7 per Gallon, Mono County, where they have to bring it in with mule teams. At Da Wire, Californians Struggle Under High Gas Prices Ahead Of Primaries, a useful reminder. From the Wombat's In The Mailbox: 06.06.22, Hogewash: A Diesel Fuel Pump In Westminster MD, Sundance, Biden Administration Quietly Raised Amount of Ethanol Required in Summer Blend Gasoline from Ten Percent to Fifteen, Three Predictable Problems Will Surface Soon. I have to fill the boat before that goes into effect. Alcohol kills boat motors.

At Based Politics, This Federal Agency is Spending $300 Million on ‘Digital Equity’. I'm not sure what that means but it doesn't mean any good. At Wa Free Bee, Biden’s Push for Universal Preschool Could Hike Inflation, Study Shows. Like almost everything he pushes for. Stacey Lennox at PJ, Why Joe Biden's Student Loan Relief Could Backfire With Financially Savvy Gen Z

And some culture war DIY, so I can get going:

The Wombat has Rule 5 Sunday: Atago-sama’s Wedding and FMJRA 2.0: Rubycon up on time and under budget at The Other McCain.
Posted by Fritz at 11:38 AM