Monarchs, Endangered or Not?

Although they will have to wait till 2024, monarch butterflies are slated for a decision by the U.S. Fish and Wildlife Service on receiving endangered or threatened species protection.

The population is below the threshold at which government scientists estimate the butterfly migrations could collapse. The Center for Biological Diversity, along with the Center for Food Safety, petitioned for protection of the butterflies Aug. 26, 2014.

“The Service’s slow, bureaucratic process for listing species has tragic consequences, like further declines, more difficult recoveries and sometimes even extinction,” said Noah Greenwald, endangered species director at the center. "We’re in an extinction crisis, and scientists are warning of the impending loss of more than a million species. We need a Fish and Wildlife Service that does its job and acts with urgency.” 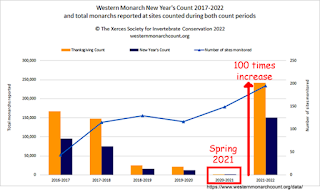 But some evidence suggests that Monarchs are actually rebounding, from Kip Hansen at WUWT, 2022 Monarch Butterfly Update

This last March, I reported on these digital pages the marvelous and mysterious news that the census of the Western Monarch annual migration in California had shown an increase in overwintering monarchs by 100 times over the previous year. The expert consensus had been that the Western migration would be shown to be extinct.

But Nature does not always listen to the experts and just does what it does.

“The butterflies hit a devastating record low last year [2020-2021], numbering fewer than 2,000 across California.” …. “We were pretty concerned last year that we were potentially facing a reality where there would no longer be monarch butterflies in the Western US,” Sarina Jepsen, director of the endangered species program at the Xerces Society” [ source ]

That statement from Sarina Jepsen is probably a misquote – no one thinks that the Monarch Butterfly (Danaus plexippus) is going extinct in the Western U.S.. The fear is that the natural phenomena called the Western Monarch Migration will cease. “…in 1983, the IUCN took the unprecedented step of creating a new category in the Invertebrate Red Data Book, in order to list the monarch migration as a Threatened Phenomenon. This is because the numbers of American migrants are falling sharply.” [ source ]

This last March I reported that due to the Covid pandemic (probably) the usual annual census of overwintering Monarchs in Mexico had either not been completed or had not been reported. Now, at last, the WWF, in conjunction and partnership with . . . the Secretariat of Environment and Natural Resources (Mexico), the National Commission of Natural Protected Areas (Conanp), the Monarch Butterfly Biosphere Reserve, World Wildlife Federation, and the TELMEX Foundation. has finally, issued the annual report as a four-page .pdf file. 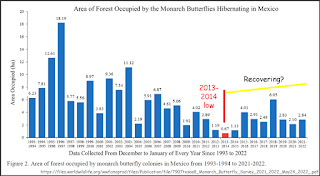 Monarch experts are not in agreement about what has caused either the near-disastrous low of 2013-2014 or the recent improvements. Most agree on the major culprit for the population decline since the 1990s – changes in agricultural practices, including the use of Roundup-type herbicides which greatly reduced the incidence of milkweed among field crops, like corn, and began to be used to eliminate roadside weeds in addition to the usual mowing. The aggregate effect on milkweed populations, necessary food for monarch caterpillars, can be seen in the monarch migration numbers. This is known as the “milkweed limitation hypothesis.”

Chip Taylor, director of Monarch Watch, recently completed a study that found that numbers of monarchs overwintering in central Mexico is directly tied to the size of the summer population in the U.S. Midwest.

Published Aug. 7 in the journal Frontiers in Ecology and Evolution, the researchers show that the decline in the monarchs’ overwintering numbers is not due to an increase in the deaths of monarchs during the migration — the “migration mortality hypothesis.” The main determinant of yearly variation in overwintering population size, they found, is the size of the summer population.

The “migration mortality hypothesis” has been heavily promoted in Science and Scientific American. This hypothesis aligns well with the narratives of Climate Change advocacy and goes like this: “changes in the climate are causing bad weather during critical monarch migrations time windows with more damaging storms, droughts, high winds and climbing temperatures.” However, Chip Taylor and his colleagues found:


“Showing the migration mortality hypothesis advocates their assumptions were wrong took awhile since that required a significant effort to vet our monarch tagging database for accuracy and to analyze the data,” Taylor said. “Dealing with 1.4 million records is no simple task.”

“In contrast to the predictions of the migration mortality advocates, the tagging recoveries — a measure of migration success — did not decrease over time, the researchers found.”

“In addition, the number tagged each year was correlated with the size of the overwintering population in Mexico, consistent with the milkweed limitation hypothesis. The tagging also confirmed that the majority of monarchs reaching the overwintering sites originated from the Upper Midwest.” [ source ]

The Monarch Watch study reinforces the need to restore milkweed to its original range and numbers. Restore milkweed, restore the monarchs.

Monarchs have painted themselves into a corner by requiring milkweed for reproduction. This was a perfectly fine idea when milkweed grew almost literally “everywhere”. It is still widespread but not nearly in the numbers seen in earlier decades. In the American Mid-West, the milkweed that would be maturing in the vast cornfields never got past seedling stage due to Round-up Ready agriculture. In my area, roadsides and highway verges, where milkweed flourishes, are generally mowed down in the late summer coinciding with the exact time that the caterpillars that will become the migrating super-generation of monarchs are on the milkweed plants.

Monarchs have started to return to our area for the year. I saw my first on May 25. We have a fair amount of Milkweed along undeveloped property along roads, and in the dunes by the beach. I'm not particularly worried that we aren't contributing our fair share of monarchs.

I found it mildly amusing that the link to the article on the front page of WUWT actually shows the wrong butterfly, the picture they chose is actually a Viceroy, a Monarch mimic. (some people consider them members of a co-mimic group, where all the species with similar markings gain some protection from predators by virtue of poison and bad tastes. This is called Müllerian mimicry (no relation). There are other butterflies in the group, including the Queen. While Monarchs are quite common here in summer, the Viceroy seems to be quite rare, and the few I see are always in the same place.