Election 2021: Did Newsom's Wife Attempt to Buy off Rose McGowan?

From HE, news that Wisconsin Special Counsel Seeks to Prevent Destruction of 2020 Election Evidence. “Wisconsin elections must be transparent, inclusive and accountable – and the WEC’s cooperation in preserving evidence is necessary for that goal to be met,” Gableman said." Now watch as Democrats line up to demand swift destruction of the evidence.

At Breitbart, Justice Breyer explains that Trump’s 2020 Election Case Did Not Meet ‘Normal Criteria’ for Supreme Court, without actually explaining what those criteria are. Some secret sauce cooked up by John Roberts. If the election hasn't been held, it's premature to complain; if it has been held, it's too late. Also from Breitbart, Biden Plans to Attack Filibuster in Last-Ditch Effort to Pass Massive Voting Bill. Here's hoping Manchin and Sinema can hold fast. But it's bad when you have to rely on Senators from the other side.

Jazz Shaw at Hot Hair has a Poll: Democrats see Trump supporters, unvaccinated as more dangerous than Taliban, China. To be fair. I think Democrats are more dangerous than the Taliban and China, too, in the long run. At NYPo, Salena Zito explains why Why Trump signs are mushrooming across the US a year after 2020 election

“Putting those signs up was their way of saying this is the new resistance,” said Youngstown State University political scientist Paul Sracic. “We saw them in places that historically supported Democrats, like here in Trumbull and Mahoning counties, two of the bluest counties in Ohio, as well as blue counties in Michigan, Wisconsin and Pennsylvania.”

Here’s how this dynamic plays out: When Democrats are legislating on something major, they look around the field and say to themselves, “Yeah, we’re going to take some casualties on this one, but we’re going to change America.” And then they blast right through it. Pelosi is going to lose members for this overhaul of our country and she knows it — she’s just decided that given the trouble they’re already heading into, it’s worth it.

She’s thrown away a House majority before, back in 2010. But guess what? Before she did, she changed the entire country with Obamacare. That was her exit bomb; that was the sacrifice she made. And now she’s back, Obamacare is still the law (because of the Republicans and the legacies), and the temptation is going to return to laughing at her when she loses again in 2022.

But if she gets this budget through, well then who cares. Her legacy will be remaking the role of government and its interactions with an increasingly dependent class of citizens in the most major way since President Lyndon B. Johnson and his Great Society 60 years ago.

Now, what do Republicans do when they’re in charge? And not just having the House — when they get to pass whatever they want without consequence — but when it matters.

When it matters, Republicans look around and say, “Oh no we can’t do that, we’d lose a man. The Democrats would take seats.” They are virtually a majority for the sake of being a majority. They just want to polish it up, put it on the shelf, and look at it. “Border? Abortion? Woof, those are tough fights, we’ll lose members. It’s an election year, after all, or if it isn’t, it will be soon.” 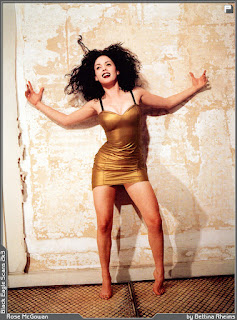 "So this woman, I don’t know, some blonde lady name with the last name of the Newsom, cold-calls me, and was like, David Boies wants to know what it would take to make you happy,'" McGowan told Dave Rubin on the Rubin Report YouTube show.

Elder said that he does not know if McGowan's allegations are true, but he told Fox LA that McGowan "has produced emails that were sent to her from Gavin Newsom's wife."

How did she know she was blonde through the phone?

New: Tomorrow @larryelder is holding a press conference in Los Angeles with @rosemcgowan.

Per the campaign, McGowan will "discuss her allegations that Jennifer Siebel Newsom...tried to bribe her in order to suppress the bombshell Harvey Weinstein sexual abuse scandal." pic.twitter.com/HCorl3cPWm

Hot Hair cites the NYT in pondering What the California recall means for the future of mail-in voting  “There will come a day where the highest voter turnout is not on Election Day,”
Across da pond Da Mail notices that US Capitol Police will launch disciplinary action in six cases after 'violations' during January 6 riots. Are they going to discipline the guys who shook demonstrators hands, and let them in?
Rebecca Down at Town Hall sees Democratic Congressional Candidate's Tweet on 9/11: 'Not Even Close' That Jan. 6 Was Worse, Pam Keith, Esq.

9/11/2001 ceased being the worst thing that happened to America in my lifetime.

It’s really weird and painful to process and say that.

But it’s the truth.

And quite frankly… it’s not even close.

The deaths of 3,000 Americans and billions of dollars of property and economic value were exceeded when a few hundred American held a mostly peaceful demonstration (by Democrat standards) to question the result of the election?


Keith, a Democrat, ran against Rep. Brian Mast (R-FL) in 2020 for his Congressional seat in the 18th district of Florida. Mast beat her with 56.3 percent of the vote to Keith's 41.5 percent.

Keith ultimately restricted replies on the tweet, but not before getting ratioed by those who reminded her how truly offensive it was.


The only president who delivered a formal speech on 9/11 was former President George W. Bush. And it was terrible.

In two ways. First, Bush's speech was as much about decrying today's political divisions as it was about remembering the events of Sept. 11. But Bush showed an astonishing lack of self-awareness of the role his own actions played in creating those divisions. And second, Bush helped widen those divisions by endorsing a Rachel Maddow-esque argument that an equivalence exists between the plane-hijacking, murderous terrorists of Sept. 11, 2001, and the Capitol rioters of Jan. 6, 2021 — a comparison that has no basis in fact but has done much to sour the national debate.

The Wombat has Rule 5 Sunday: Late Night With The Alabama Cheer Squad up and at 'em.