Chesapeake's Other Sea Bass Getting Some Love 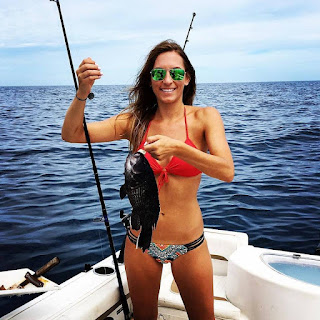 With few rockfish (stripers) in the Chesapeake Bay these days, diversification is more important than ever. As conservation groups work with fishery managers to rebuild the East Coast striper stock, many conservation-minded anglers are doing their part. More of us are practicing catch-and-release of this prized gamefish, as well as targeting other species such as blue catfish, snakeheads, and black sea bass.

The first two fish might ring a bell for upper Chesapeake fishers, but perhaps not so much on that third species. Also known as blackfish, sea bass are tasty bottom dwellers typically caught in the ocean waters off the Delmarva Peninsula. Catching a legal black sea bass in Maryland’s part of the Chesapeake Bay was considered rare not too many years ago. 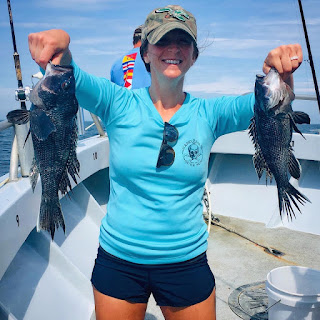 I have an amusing story about that. Once, long ago I went out on a charter with a bunch of internet critters, including some DNR types. I jigged up a small Black Sea Bass and Capt. Jimmy Brincefield and the DNR folk insisted I keep it, so it did. It turned out they had the regs wrong, and it was a half inch short. No tickets were issued.

However, based upon on-the-water reports from anglers and charterboat captains, that seems to be changing. Moreover, Maryland state biologists caught black sea bass in their winter trawl surveys for the first time in 2020 and 2021. Although there is no scientific consensus as to why the blackfish’s range is expanding, they’ve been caught in even more northern waters, as far north as Buzzards Bay, Mass.

On the upper Bay, the best terrain for catching sea bass is similar to that in the Atlantic—meaning, over reefs and other structure. In the Chesapeake, we commonly call such important fish habitat “live bottom,” which traditionally has referred to the Chesapeake’s vast oyster bars. Sadly, the Bay’s once-prolific vertical reefs are a mere fraction of their historical abundance. So today, live bottom—at least to me—can mean any structure on which a thriving ecosystem exists; a place where bottom fish can hide, rest, and feed in favorable conditions. Manmade reefs and other hard-bottom areas fit that bill. There’s a lot of good work going on in this arena. 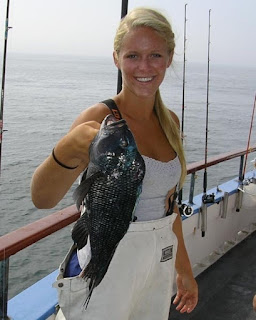 A couple years, on a trip with Pete and Col. Dziengeleski, we got into a pretty good Black Sea Bass bite at a wreck down south about this time of year. I'm going out tomorrow. Maybe it will happen again.

By now you catch my drift: The key to getting on a good sea bass bite is finding a good patch of live bottom. Otherwise, you better have packed a good lunch because it’s likely to be a long day waiting for a nibble. Generally, in the summer, blackfish like to hang around the shallower depths from 15–25 feet. The fish then move to deeper waters on the reefs as the water temperatures drop in the fall.

Some of the more popular reefs that hold sea bass and other gamefish include the Gooses, Tilghman, Point No Point, and Tangier Reef. This is a partial list, however, and several sea bass grounds are conveniently close to a public ramp. 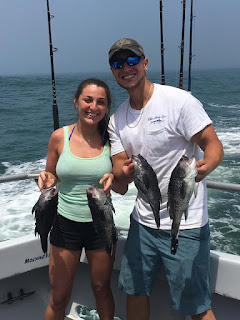 One year, long ago, the shallows near CCNPP were crawling with small Black Sea Bass. I was catching them on small two hook spot rigs, probably using bloodworms, which used to be affordable.

Sea bass will hit bait and lures, with a preference for fresh bait—as fresh as you can get it. You cannot go wrong with bloodworms, squid strips, and other fishy bait. Did I mention it should be fresh? Also, processed baits such as Fishbites have been known to bring strikes. A standard top-bottom rig, flicker-style hooks, and the new Chesapeake sabiki rigs are proving themselves to work well. Go on the smaller size with hooks: #2 or #4 hooks on your bottom rigs, and 1/0 or 2/0 hooks on your lures.

Speaking of lures, I reached out to Captain Lonnie Johnson, inventor of G Eye Jigs and Rain Minnow lures, for his take on what the sea bass like. He’s been enjoying a good sea bass bite for a few years so his intel is timely. 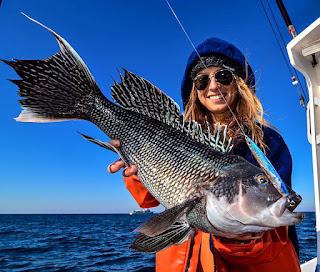 More recently, the keeper Black Sea Bass we caught were mostly on heavy metal, small sting silvers and the like.

As far as keeping a few for dinner, sea bass are an excellent-tasting fish that can be prepared in several ways. Maryland’s regulations for the Chesapeake Bay and its coastal waters are identical: May 15–Dec. 31, 2021, with a minimum size of 12.5 inches and a daily creel of 15 fish. Virginia’s limit is also 15 fish at least 12.5 inches long. In my opinion, you only need a handful. So if you’re looking for a change of pace from the other bass with the seven stripes, the hard-fighting, good-tasting sea bass is just what the doctor ordered.

The Wombat has both Rule 5 Sunday: Rabbit Season! posted at The Other McCain on time and under budget.