A fairly light day today; is it because I didn't collect them as efficiently because I went fishing, or because the news is actually slackening as Afghanistan and the continuing WuFlu crisis continue to drag the country down. Embrace the healing power of and! 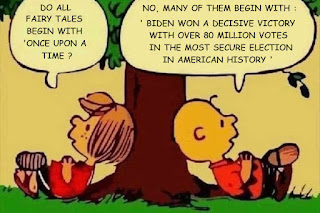 We'll go  first to the Wombat's In The Mailbox: 09.07.21, for two from the Geller Report. First Lost Ballots In Three States Exceed Biden’s Victory Margin. Not exactly news, but something we need to keep in mind as people pour over the results. Second,  Video Of 240 Democrat Operatives Dumping Thousands Of Ballots Into Georgia Drop Boxes In The Dead Of Night,


According to John Fredericks state officials now have video of 240 leftist operatives he called “ballot traffickers” dumping tens of thousands of ballots into drop boxes in the middle of the night in locations across Georgia.

This is criminal behavior caught on video!

But no video at the link. Reportedly, it's been reported to the DOJ, who will promptly bury it in Yucca Mountain. At Am Great, Dan Gelernter thinks Voter Fraud Is a Supreme Court Problem, but sadly, it's clear to me the Roberts Court has no interest in getting involved.

1) We say nothing is going to happen

2) We say something might happen, but we should do nothing

3) We say maybe we should do something, but there’s nothing we can do

4) We say maybe we could have done something, but it’s too late now!

Fox, Did Trump just go up with the first TV ad of the 2024 presidential campaign? Probably.

45: A heartbreaking loss for the United States and its great Military. We must have hostages released and our Military equipment returned, NOW! pic.twitter.com/jC1EbQzT0z

Twitchy, ‘Not someone to be taken seriously. EVER.’ Adam Kinzinger can’t DEAL when called out by an ACTUAL conservative over his ‘angry’ Biden/Afghanistan tweet. After he loses his primary, I expect him to take a comfortable position as a kept conservative at CNN or MSNBC.
In Jan. 6th related article, Julie Kelly at Am Great expands her search for truth with to story of one of the other casualties at the Capitol incursion, Rosanne Boyland, who was reportedly trampled in the crowd inside the Capitol, or died of a drug overdose. It appears the Capitol Cops may have been less than diligent in keeping her alive. What Did the Capitol Celebrity Cops Do to Roseanne Boyland? Read it and weep.
Herr Professor Jacobsen at LI, No Comparison: Non-Violent BLM Protesters Treated More Leniently Than Non-Violent Jan. 6 Protesters and Kevin Downey at PJ Media, BLM Career Thug Who Nearly Kicked a Man to Death Gets Early Release. At PM, Antifa accused of shooting right-wing activist at Washington state Capitol anti-vaccine mandate protest. "Toese had previously been placed on Antifa's "kill list" during the far-left occupation in downtown Portland, Oregon, on Aug. 22." From LI, Echoes Of Bolshevik Revolution: Democrat Replacement Of Police With Antifa/BLM Anarchist ‘Authority’
KTVZ News reports Ex-FBI official says law enforcement needs to take upcoming right-wing rally in DC ‘very seriously’. But why would anyone take Andy McCabe seriously anymore. He was fired for cause.
Across da pond at Da Mail, Proud Boys leader Enrique Tarrio holds up a LIGHTER to the Capitol building moments before reporting to jail to begin five-month sentence for burning black church's BLM flag. Yes, stealing and destroying someone else's flag was a crime, but you can't convince me that if it had been a Democrat stealing and burning someone else's "Don't Tread on Me" flag, the sentence from a DC judge would have been far more lenient.
Posted by Fritz at 10:25 AM