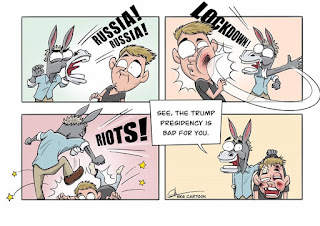 There's really only one significant story in Russiagate today, but it's a moderately important one, and there are a bazillion links to it (hey; bazillion passed spell check!). Kevin Clinesmith, the FBI lawyer involved in the original Crossfire Hurricane team, and sucked up by the Special Counsel's probe (and subsequently let go for anti-Trump messages and all, has agreed to plead guilty to tampering with the evidence to get the FISA warrants on Carter Page, specifically turning an email the said that Page was working for the CIA into one that didn't, fulfilling Bill Barr's promise of some visible progress with Durham's probe on Friday, a violation identified by Horowitz's probe, and referred to DOJ for criminal prosecution. Now that's a sentence! Now, on with the linkagery!  I'm not going to quote much if anything, pretty much all we know is up there already.

Ace, Barr: There Will be "A Development" In the Russia Hoax Investigation, But Nothing "Earth-Shattering" = Yup: Clinesmith to Plead Guilty to Falsifying Record


The smart money was always on these guys chickening out and only indicting Clinesmith, a low-level employee caught actually altering evidence. Maybe McCabe, too, if we're lucky.

That seems to be where they're going. Mistakes were made, improper training, blame "the system" because the system can't get fired and can't go to jail.

They have James Comey as an emergency scapegoat if the small fish aren't enough.

Of course, the usual suspects do their best to downplay the significance of this: WaPoo, Ex-FBI lawyer, accused of falsifying document in probe of Trump’s campaign, to plead guilty


Court documents filed in the Clinesmith case do not allege a broader political or anti-Trump conspiracy within the FBI or Justice Department, and a person familiar with the matter said Clinesmith does not intend to describe any such efforts when he enters his plea. This person, like others, spoke on the condition of anonymity to discuss an ongoing case.
. . .
A lawyer for Clinesmith said: “Kevin deeply regrets having altered the email. It was never his intent to mislead the court or his colleagues as he believed the information he relayed was accurate. But Kevin understands what he did was wrong and accepts responsibility.” The expected plea was first reported by the New York Times.

and, via Insty, Mollie Hemingway:

NPR, which was a co-conspirator in the Russia collusion hoax, redefines Clinesmith pleading guilty to falsifying evidence against Trump affiliate Carter Page as something "related to information-gathering." Our media are completely and utterly corrupt. https://t.co/m0Y0zqFC8A
— Mollie (@MZHemingway) August 14, 2020

Sundance also thinks he catches the Mueller team preemptively distancing themselves from Clinesmith in the Mueller Report, Proactive Distancing – The Special Counsel Operation…

But, will this result in more prosecutions or guilty pleas? Ace, Update: Is Clinesmith Cooperating and Giving Information Against Higher-Ups?

Nice Deb at AmGreat, Trump: Clinesmith Guilty Plea Is ‘Just the Beginning’ with ‘More to Come’ It looks like some of Clinesmith's bosses were aware,

altered an official record (CIA email) that was used to continue surveillance in 2017 on former Trump campaign aide @carterwpage. CBS News has learned that after FBI records were declassified by @DNI_Ratcliffe last month showing Clinesmith was part of a team using a 2016...
— Catherine Herridge (@CBS_Herridge) August 14, 2020

OK, I guess that's enough of that. What else? Also via  the Wombat's In The Mailbox: 08.14.20, Julie Kelly at Am Great says Biden’s Ukraine Problem Isn’t Going Away, but the press will do their level best. On behalf of Joe Biden, Politico whines that, Besieged on all sides, Ron Johnson says his probe 'would certainly' help Trump win reelection "A spokesman for Biden says "that Ron Johnson's disgraceful conduct is the definition of malfeasance."" I'll bet he wasn't nearly as concerned when the House was conducting an impeachment for the sole purpose of improving his chances.

John Solomon at JTN, Clinton gets another pass: Appeals court spares her from deposition in email scandal


Four-plus years after the James Comey-led FBI chose not to file charges against Hillary Clinton, despite evidence she transmitted classified information on an insecure email server, a federal appeals court Friday gave the former secretary of state another legal pass in the case.

A three-judge panel of the D.C. Circuit Court of Appeals granted a writ of mandamus requested by Clinton's lawyers overturning a judge's order that she submit to a sworn deposition in a Freedom of Information Act case brought by the conservative watchdog group Judicial Watch.

The court ruled that U.S. District Judge Royce Lamberth erred in ordering the deposition in the first place.

"Discovery in FOIA cases is not a punishment, and the district court has no basis to order further inquiry into Secretary Clinton’s state of mind," the appeals court ruled.

I demand an en banc hearing. and if that fails take it to the Supreme Court!

Linked at Pirate's Cove in the weekly Sorta Blogless Sunday Pinup and links.
Posted by Fritz at 9:59 AM