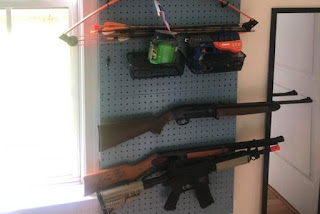 
A Baltimore County, Md., fifth-grader got a visit from the police after his teacher called to report that she had seen a BB gun on the wall behind the student during a class video call.

The boy’s mother, Courtney Lancaster Sperry, a Navy veteran, is warning other parents about a lack of privacy during virtual classes after her son was targeted by a teacher who saw what she thought was a scary-looking gun hanging on the wall of the boy’s bedroom. 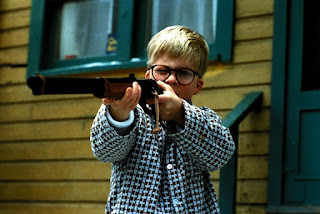 A Red Ryder BB gun is a scary looking gun? Better be careful, it'll go right through the zoom screen, and put somebody's eye out!


“While my son was on a Zoom call, a ‘concerned parent’ and subsequently two teachers saw his properly stowed and mounted Red Ryder BB gun and one other BB gun in the background,” Sperry wrote on Facebook. “He was not holding them and never intentionally showed them on video. In fact, he was oblivious that they could even be seen in the background.”

After the teacher reported the gun, the principal, Jason Feiler, decided to call the police to report the guns and ask that the home be searched.

The principal and the teacher cited a rule stating that students may not bring guns to school and claimed it extended to virtual classes as well, Sperry said, adding that the school handbook does not address rules for virtual learning at all. Besides, “he did not BRING anything to this meeting and he is in his own home,” she said. “They were simply in the background in our home, safely stowed in a room behind a closed door, with no ammunition (if you can even call it that).”

I like how the principal makes up rules on the spot, like education is a game of Calvin Ball, and calls the cops. I think Ms. Sperry needs to get together with fellow parents, and monitor the zoom calls for possible evidence of wrong doing by the teachers, and start reporting those to the proper authorities. You don't even have to be right!


Sperry told PJ Media that the school’s vice-principal called her ex-husband, claiming to be checking on network connectivity. She believes the real reason for the call was to find out whose home her son was at. The vice-principal “ended the call without leveraging the opportunity to discuss the matter and rather was fishing for information to find out where to dispatch police,” she said.

The 11-year-old in question is a Boy Scout, pursuing the rank of Eagle Scout, and is an “outdoors / all-boy kind of kid,” his mom said. “And as his parents and by way of legal rights, he is allowed to own said guns.” In addition to the BB gun, she said her son is training in archery and enjoys shooting his Airsoft gun.

“So, I answered the door. The police officer was… very nice. He explained to me that he was coming to address an issue with my son’s school,” the mother told Fox Baltimore. “And then explained to me that he was here to search for weapons, in my home. And I consented to let him in. And then I, unfortunately, stood there and watched police officers enter my 11-year-old son’s bedroom.”

“The officers that responded were appalled at the call and even commended the set-up that my son has for his toys and commended him also on his respect and understanding of the BB guns,” Sperry wrote on Facebook.

At least the cops had some sense of reasonability.


According to Sperry, the spy teacher took a screenshot of the boy’s bedroom, which is incredibly creepy and a violation of the family’s privacy. When the mother demanded to see the screenshot taken by the creeper-teacher, she was told she would not be allowed to view it because it wasn’t part of his official school record.

“It’s absolutely scary to think about,” Sperry said. “Who are on these calls? Who do we have viewing [our] children and subsequently taking these screenshots that can be sent anywhere or used for any purpose?”

There should be some consequences for the teacher and principal. They should be forced to take a gun safety class.
Posted by Fritz at 2:31 PM