The beachfront compound in Hawaii where former President Barack Obama reportedly plans to someday retire used a planning loophole to retain a seawall that is likely causing beach erosion, according to a new report.

State officials and community members confirmed to ProPublica that Obama plans to reside in the compound on Oahu, which was purchased for $8.7 million by his close friend Marty Nesbitt in 2015.

After tearing down the site's mansion made famous as the house from Magnum PI, developers are building three homes, two pools and a security perimeter on the three-acre beachfront parcel, permits show.

OK, tearing down Magnum's (or rather, Robin's) mansion is sad, well, things come and go.


However, the century-old seawall on the property is set to remain, despite state policies designed to preserve Hawaii’s natural coastlines and environmental experts who say such structures cause coastal damage and beach erosion. 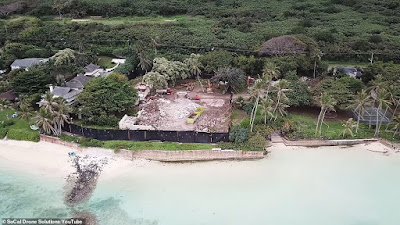 The reason: a loophole that allowed the sellers of the property to obtain an easement on the seawall for a one-time payment of $61,400 before it was sold in 2015, according to ProPublica.

The easement is essentially a 55-year lease on the public land that sits under the seawall, giving the private property owner the ability to keep it.

Such easements have come under criticism in Hawaii, though they are far from rare, with some 120 being awarded over the past two decades.

The developers of the property are now reportedly pursuing an expansion of the seawall - angering community members who point out that the existing beach along the property has nearly disappeared, and who view Obama as a proponent of environmental sustainability.