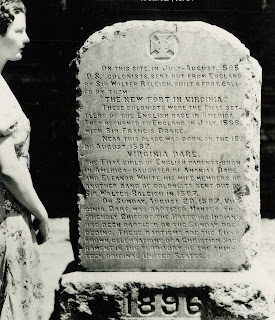 The Virginian Pilot: ‘The mystery is over’: Researchers say they know what happened to ‘Lost Colony’


The English colonists who settled the so-called Lost Colony before disappearing from history simply went to live with their native friends — the Croatoans of Hatteras, according to a new book.

“They were never lost,” said Scott Dawson, who has researched records and dug up artifacts where the colonists lived with the Indians in the 16th century. “It was made up. The mystery is over.”
. . .
The evidence shows the colony left Roanoke Island with the friendly Croatoans to settle on Hatteras Island. They thrived, ate well, had mixed families and endured for generations. More than a century later, explorer John Lawson found natives with blue eyes who recounted they had ancestors who could “speak out of a book,” Lawson wrote.

The two cultures adapted English earrings into fishhooks and gun barrels into sharp-ended tubes to tap tar from trees.

The Lost Colony stemmed from an 1587 expedition. Just weeks after arriving, White had to leave the group of settlers — including his daughter, Eleanor Dare, and newborn granddaughter, Virginia — to get more supplies from England. White was not able to return for three years. When he arrived at Roanoke Island in 1590 he found “CROATOAN” carved on a post and “cro” on a tree. He found no distress marks.

They literally made a sign. It was expected the colonists would go with their friends, the Croatoans and tribe member, Manteo, Dawson said. Manteo had traveled to England with earlier expeditions and was baptized a Christian on Roanoke Island.

White later wrote of finding the writing on the post, “I greatly joyed that I had found a certain token of their being at Croatoan where Manteo was born ....”

A bad storm and a near mutiny kept White from reaching Hatteras. He returned to England without ever seeing his colony again. . . .

The early colonists tended to be a clueless lot, not knowing how to take care of themselves in the new and often hostile land. But these colonists went on to live with the Indians Native Americans, and marry into their families. Someone now may well be descended from Virginia Dare.

The Wombat has Rule 5 Sunday: Kim Klacik up on time and under budget at The Other McCain.
Posted by Fritz at 1:32 PM