Anything New with the WuFlu?

Time, once again,  for the occasional dump of interesting links regarding the WuFlu. First, an interesting Twitter thread regarding herd immunity:

1/ There is growing evidence that T-cell immunity allows populations to reach herd immunity once only 10-20% are infected with SARS-CoV-2.

This would explain why a highly transmissible virus in densely populated areas peaked at 10-20% infected regardless of lockdowns or masks.
— James Todaro, MD (@JamesTodaroMD) August 10, 2020

Hot Air cites the WSJ in What’s Slowing Miami’s COVID Spread? Partial “Herd Immunity” May Play A Part. WaPoo, Forty percent of people with coronavirus infections have no symptoms. Might they be the key to ending the pandemic?   On the other hand, The LA Times thinks that San Quentin's coronavirus outbreak shows why 'herd immunity' could mean disaster


COVID-19 spread unchecked across California's oldest prison in ways that stunned public health experts, despite efforts to control the disease. As of Monday, there had been more than 2,200 cases and 25 deaths, among a population of more than 3,260 people. On Sunday, a guard became one of the latest to die.

That means more than two-thirds of the prison's population has been infected, said Dr. George Rutherford, epidemiologist and infectious diseases expert at UC San Francisco.

And though new cases have slowed, they are still occurring — with 60 reported in the last two weeks — suggesting herd immunity has not yet been achieved.

San Quentin's death toll translates to a mortality rate of about 767 people dying out of every 100,000 persons.

I'm not surprised it spreads like wildfire in a prison environment, but why does this seem so different and more deadly than what we see elsewhere? I would think a prison population would be younger in general than the general population.

On lockdowns, From AmThink Lockdowns Never Again: Sweden Was Right, and We Were Wrong, but at Bloomberg News they're selling the notion that Forced Isolation May Be the Only Way to Stop Resurgence of Virus, or at least until Trump is out of office, whichever comes first. From statista, Coronavirus (COVID-19) deaths worldwide per one million population as of August 14, 2020, by country But I don't trust reporting from most countries. Hell, I don't even trust reporting from the US. 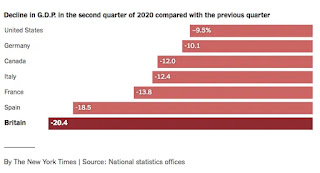 But also important: I LINKED THIS STORY ON ECONOMIC DAMAGE FROM THE CORONAVIRUS EARLIER, but this graphic is worth breaking out, especially since there are some people trying to claim that the U.S. response has been uniquely bad because #OrangeManBad.

If it weren't for Andrew Cuomo's New York (and it nearby neighbors) the US would score much better on both health and economic damage. Ace, AP: Andrew Cuomo Significantly Undercounted the Number of Nursing Home Victims He Murdered By Only Counting Those Who Died In the Nursing Home -- Rather Than at the Emergency Room or ICU, After Being Infected by Him -- as "Nursing Home Deaths" - This Angel of Death "flattened the curve" by simply murdering all the high-risk elderly people. and Andrew Cuomo: Nah, I Don't See the Need for an Independent View of My Decision to Kill Thousands and Thousands of Elderly People By Forcing Nursing Homes to Take Coronavirus Patients. Capt Ed at Hot Air, Cuomo: C’mon, We Don’t Need An Independent Review Of My Handling Of COVID And Nursing Homes and from Jazz Shaw at Hot Air VIP, NYC Bar Protests Cuomo’s Food Mandate, Mysteriously Has Liquor License Suspended Sometimes you get what you voted for good and hard.

So how's that search for the cure (or at least a better treatment) going? Axios, Why you should be skeptical of Russia's coronavirus vaccine claims. In Russia, they lie just to stay in practice.

But interestingly, The FDA-approved drug ivermectin inhibits the replication of SARS-CoV-2 in vitro, and Breakthrough Drug: Ivermectin Shows 'Astounding' Results Against Coronavirus. But will it in practice? Early trials are encouraging. Interesting. It's main use is to kill roundworms. It's widely used in dogs. Will big pharma bother with it if it's too cheap? I wonder.

Statistically, it seems that Vitamin D is good. The Lancet, Vitamin D for COVID-19: a case to answer?. The Scientist, Trials Seek to Answer if Vitamin D Could Help in COVID-19. Vitamin D is cheap and relatively harmless, but I wonder if there's some statistical issue with covariation here. Specifically, people with adequate Vitamin D tend to be healthier than those with low levels. But take your Vitamin D if you aren't getting enough sun. 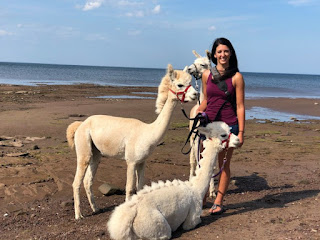 
Most animals, including humans, produce just a single type of antibody, a Y-shaped protein used for neutralising viruses.

Coronaviruses like SARS-CoV-2, which causes COVID-19, are covered in sharp spike-proteins that are used to enter human cells. The top part of the Y on an antibody sticks to that spike, gumming up the spike - like chewing gum on a shoe - so that it can't stick to the cell.

Camelids, a species that includes alpacas, llamas and camels, produce two types of antibodies, one similar to human antibodies and the other dramatically smaller, called a nanobody. . . .

Meh; I don't see this coming up with much soon, but it will keep some scientists funded and busy for a while.

Hot Air steals from the WSJ, The Treatment That Could Crush COVID “medicinal signaling cells,”. Yeah, but where do you get them?

And the mandatory section on Fauci? PJ Media, Anti-Lockdown Dr. Scott Atlas Joins Coronavirus Task Force: Is Fauci Finally Out? and at Red State, Trump Taps Esteemed Anti-Fauci Stanford Doc for COVID Team – Huge Game Changer. No need to fire Fauci. Having divergent views on the task force is a good idea. Ideas never get proved if they don't get tested.


But apart from his impeccable credentials, Dr. Atlas is one of the thousands of medical experts the Democrats and their media enablers don’t want you to know about who’ve been trying to put the breaks on the suicidal, anti-science response to COVID-19 they’ve conned us into following.

Way back on April 22, Dr. Atlas penned an op-ed in The Hill whose title couldn’t have been clearer:

The data is in — stop the panic and end the total isolation.

He explained five facts about COVID-19 that were already apparent from the data we had a month after lockdowns started. But most Americans were totally unaware and, thanks to our corrupt and incompetent national press, still are.


Fact 1: The overwhelming majority of people do not have any significant risk of dying from COVID-19.
Fact 2: Protecting older, at-risk people eliminates hospital overcrowding.
Fact 3: Vital herd immunity is actually PREVENTED by total isolation policies, prolonging the problem.
Fact 4: People are dying from being denied other medical care due to hypothetical COVID-19 fatality projections that turned out to be garbage.
Fact 5: We have a clearly defined population at risk who can be protected with targeted measures.

Countless lives would’ve been saved and a heartbreaking amount of needless hardship and misery averted if more people had been aware of Dr. Atlas’s article back in April when it first appeared.

Zero Hedge, Dr. Fauci Confirms "No Reason We Can't Have In-Person Voting" and Capt. Ed, Fauci: If We Can Safely Shop At The Grocery Store, We Can Safely Vote In Person

Can people safely go out and vote in person this year? Dr. Fauci answers this and more in a @NatGeo virtual panel moderated by @DebRobertsABC. https://t.co/MPZzrQrKLS pic.twitter.com/6mYkTpOGOH
— ABC News (@ABC) August 13, 2020

To be fair, he oversampled hot chicks, a notoriously thoughtless cohort, not that I blame him.