The Mystery Mess on the Potomac 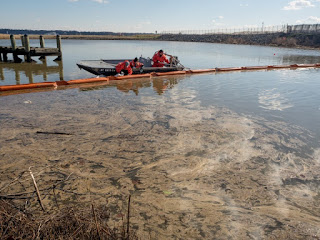 This has been brewing a few days now, and they don't seem Much closer to discovering where it came from than when in appeared in the wake of El Ninsnowmageddocalypse: Oil sheen on Potomac near DC under investigation


Oily liquid continued to ooze Sunday into a waterfowl pond along the Potomac River as investigators searched for a source in a Washington, D.C. area storm drain.

Booms were strung across the outfall to capture the oil, augmenting containment measures put in Roaches Run Friday.

“This allowed us to keep any further sheen from entering the Potomac from Roaches Run, and our hope is that it will help us to rule out other avenues of entry.” Ruhlig said in a statement released Sunday afternoon. The Coast Guard is coordinating the efforts of federal, state and local authorities dealing with the contamination.

Another 11 geese appear to have been affected by the oily sheen, in addition to 19 oiled geese and a duck recovered since Friday, according to the statement. A nonprofit wildlife rehabilitation service, Tri-State Bird Rescue & Research of Newark, DE, is working with the U.S. Fish and Wildlife Service to capture the geese.

The Coast Guard is working with Virginia’s Department of Environmental Quality and Arlington County to try tracing the discharge up through the storm drain network.

I don't think this is a serious oil spill, like the spill into the Patuxent was a few years ago, but it's very odd they can't seem to find where it originated.
Posted by Fritz at 5:53 PM