This May Help Explain Maryland


Chronic exposure to a toxin found in some lakes and desert topcrusts contributes to neurological problems commonly associated with ALS, Alzheimer’s and other neurodegenerative diseases, a new study shows – but at least in certain animals the damage appeared to be offset by increasing an amino acid in the diet.

The study, published Wednesday by the Royal Society of London, found that vervets chronically exposed to the neurotoxin BMAA developed neurofibrillary tangles and amyloid plaque deposits in the brain.

The finding stunned researchers, who were looking for preliminary signs of disease, but were not expecting to find advanced tangles and plaques.

“They looked identical to what you see in Alzheimer’s Disease, to the point that Dr. Robert Switzer (one of the neuropatholigists) mistakenly thought we had been looking at Alzheimer’s slides,” said Paul Alan Cox, the study’s lead author and an ethnobotanist at the Institute for Ethnomedicine in Jackson Hole, Wyoming. “No-one had seen tangles in an animal before...and the higher the exposure, the denser the tangles.” 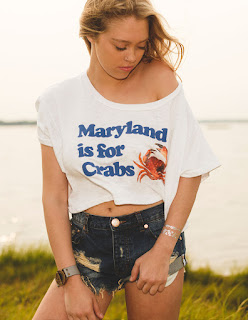 OK, very interesting, and a good reason to avoid lakes and some desert topcrusts (do they mean dessert topcrusts? - If so, that's bad). But why Maryland?


BMAA is produced by cyanobacteria, which are found in many algal blooms. It has been identified in sharks, bottom-dwelling fish, and shellfish; in desert dust in the Middle East, and in water containing toxic blue-green algae blooms, which data suggests are becoming more prevalent worldwide.
. . .
Relatively high levels of BMAA have been found in oysters in the south of France, in blue crabs in the Chesapeake Bay, and in shrimp and crab in southern Florida.

Yes, Chesapeake Blue crabs may be slowly causing your brain to congeal and make you forget stuff, but still, it's totally worth it.

Wombat-socho has the mega "Rule Five Sunday: The Two Faces Of India" and "FMJRA 2.0: Jetpack Blues" ready at the Other McCain.
Posted by Fritz at 11:12 AM