Is the Cascadia Subduction Zone Getting Ready to Rumble?

I'm trying to debunk this article in my mind, but I'm not having much luck. Four feet of change in the sea floor height in a few hours is a big change; but could it really have happened without generating a measurable earthquake?


An ocean data buoy is alerting to an "event" in the Cascadia Subduction Zone off the west coast of Oregon. This is where a magnitude 9 earthquake hit in 1700.

According to the data buoy, the water column height (depth) fell sharply within minutes off the coast of Oregon, signaling the land beneath the ocean has suddenly "sunk." Here are the graphs showing what the ocean data buoy recorded: 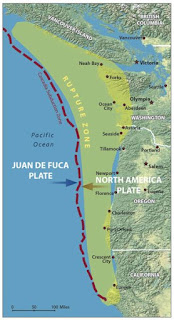 The last time the Cascadia Subduction Zone had a big break was 1700, when it sent massive tsunamis ashore across the Pacific Northwest, and even over to Japan, where it caused the "orphan tsunami", a tsunami without the normal earthquake to precede it.


Lest you think that four feet of ocean depth is nothing to be concerned about, be reminded that the entire column of water . . . all 8985 feet of it . . . is what dropped four feet.  And it did so over an area several miles wide!

When the tectonic plate snaps back upward, it can launch that entire 8985 foot column of water upward and toward the shore!

As the continental shelf rises toward the shore (the ocean gets more shallow) that 8985 foot column of water starts accumulating upon itself as it moves toward shore, becoming one massive wave, perhaps 45-50 feet tall, that hits the shore for twenty minutes!

They talk about utter devastation back to I-5, which I think is overblown, but the point is, sometime we will find out, because nothing we can do will stop the accumulation and release of seismic energy in this region. The fault breaks big about every 300-500 years based on geological data, and the last one was 1700. You do the math.

We have family who live within sight of the Pacific Ocean, and a Cascadia Subduction Megathrust earthquake is a real threat.

UPDATE: According to the National Weather Service this appears to be a hoax, and the movement above is normal tidal variations.
Posted by Fritz at 4:26 PM