The first edition of "All the news that's fit to bare" in 2016. A sporadic feature whenever desperation the spirit moves me.


A woman has been arrested for indecent exposure after lying down naked in Paris's Musee d'Orsay in front of Edouard Manet's similarly nude painting of the prostitute Olympia, her lawyer said Sunday.

Museum-goers were enjoying an exhibition entitled "Splendour and Misery: Images of Prostitution 1850-1910" when Luxembourg artist Deborah de Robertis got undressed and took on the pose of the famed Olympia.


De Robertis "was wearing a portable camera to film the public's reaction. It was an artistic performance," said her lawyer Tewfik Bouzenoune. 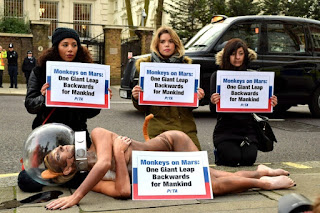 She does seem to be focused on one object. 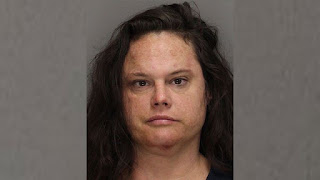 
A woman is facing several charges after going on a rampage at a Waffle House restaurant in Kennesaw, Georgia, all while completely naked.
. . .
According to police, the woman, identified as Jennifer Nicholson, stripped off her clothes, punched a woman in the face and then threw a plate at a window. She also threw several platters at patrons of the restaurant.

When police tried to subdue Nicholson, she fought back, scratching an officer.
. . .
Nicholson is facing several assault and public indecency charges.

Sometimes the service at Waffle house can be a little slow, but that's just going overboard.

But here's how they do it in Florida: Topless Florida Woman Wrecks McDonalds, Pauses to Guzzle Ice Cream 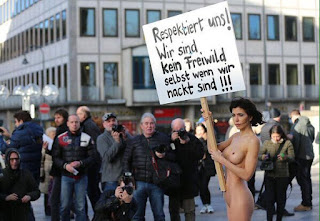 Howie at the Jawa Report calls this "The best naked protest ever".  I think he must be referring to the subject (The response of German women to sexual assaults in #Cologne ... #koelnbhf #Koeln), because, while it's good, it's not even in my top 5. 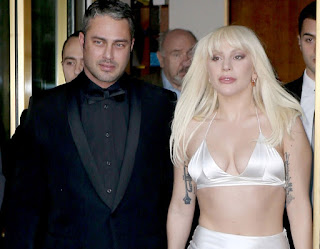 And in not-news, attention whore gets media coverage by taking her clothes off: Lady Gaga & Taylor Kinney Are Naked & 'Making Love for Peace' on New Mag Cover. Meh.

And not even close to Florida: Naked 'deranged' nurse strolls through St Peter's Basilica shouting 'I'm from Brazil' before being arrested 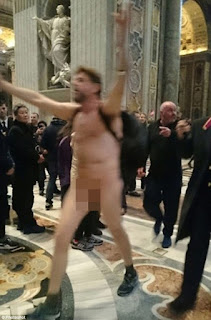 A 44-year-old Italian nurse has been detained by Vatican gendarmerie after stripping naked and marching into St Peter's Basilica in front of shocked churchgoers.

Footage shows Luis Carlos Giampaoli, who is of Brazilian origin, striding up and down the main nave of the Basilica while shouting church litanies and gesticulating at onlookers. 'Dear brothers and sisters, I'm from Brazil!' he can be heard saying in Portuguese while marching with open arms.

Giampaoli, who calls himself Cherubino - Italian for cherubs, angelic winged creatures - on his Facebook page, has been described as 'deranged' by Vatican investigative sources.

He has been taken to a psychiatric ward in Rome's Santo Spirito hospital.

And the feel good story of the lot:  Nudists rescue sinking yacht at start of Sydney-Hobart race


A group of struggling sailors in Sydney were given a surprising rescue when they found themselves being hauled to shore by a nudists.

A small wooden boat had sailed out to watch the start of the annual Sydney to Hobart race, which sees 100 vessels set out on Boxing Day every year. Michael Clarke, the recently-retired Australian cricket captain, was one of a handful of celebrities taking part in the 628 nautical mile race, which drew 600,000 to the Harbour to watch the start.

But as spectators were walking back along the coast, they saw a boat get in to trouble near Lady Bay Beach – a popular site for nudists.

"The boat came angling into the shore, which was a bit weird,” said Chris Pearce, a photographer with Getty agency. 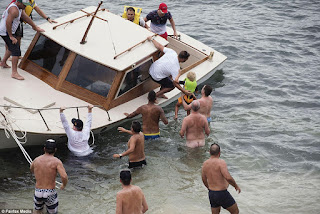 Mr Pearce said that a crowd of people swimming in the sea came to their rescue, in waters around three feet deep.

After the woman and child were rescued from the boat, those left on board started to see the funny side of the situation. Photographs of the rescue show at least one man on board grinning as nude men surrounded the boat, ready to lend a hand.

The spectacle, which lasted for around five minutes, was watched by hundreds.

"Everyone basically just stopped and watched and looked as this happened," said Mr Pearce. "When they were walking past everyone thought it was funny, because it was a nudist beach, and then this happened."

Wombat-socho has the mega "Rule Five Sunday: The Two Faces Of India" and "FMJRA 2.0: Jetpack Blues" ready at the Other McCain.
Posted by Fritz at 6:00 AM