State to Huma in 2011: Your boss better get an official e-mail account


Remember when the State Department expressed surprise that its top official spent four years running the organization without ever getting her own official e-mail account? Good times, good times. Chuck Ross makes a good catch at the Daily Caller in finding an e-mail from Huma Abedin to State executive secretary Stephen Mull rejecting his proposal for an official Blackberry with a State e-mail account in the middle of a discussion about ongoing failures with Hillary Clinton’s secret e-mail server:


“We are working to provide the Secretary per her request a Department issued Blackberry to replaced her personal unit which is malfunctioning,” wrote Mull, noting that the device was malfunctioning “possibly because of [sic] her personal email server is down.”
He offered to prepare two Blackberries, one of which would include “an operating State Department email account.”
And curiously, Mull noted that the official version “would mask her identity” but “would also be subject to FOIA requests.”

Abedin’s response? “Let’s discuss the state blackberry, doesn’t make a whole lot of sense.” Interestingly, it would appear that this e-mail conversation took place on Abedin’s official State Department e-mail account, as well as Hillary’s chief of staff Cheryl Mills, from the headers used.
. . .
This is important for several reasons, but it might put State Department officials in some very hot water. The department’s officials repeatedly represented to courts in FOIA lawsuits that they had no responsive e-mails from Hillary Clinton or her aides. Later, after the secret e-mail system was discovered, State had to go back to court and agree to search her archives but still represented that they didn’t know about her personal system. This exchange, in which Mull, Mills, and Abedin discuss how to resolve ongoing failures in Hillary’s private e-mail server, might demonstrate that State obstructed justice in these FOIA cases.

It could create other problems at State as well. They were required to keep official communications archived under the Federal Records Act. As long as no one at State knew about the system, their response early last year to demand the records after the e-mail scheme was exposed would suffice to meet that legal obligation. Now, however, it appears that not only did State Department officials knew about the private server located at the private residence, they were committing in-house State resources to keeping it in operation. That would possibly involve conversion of government resources to private use, which would be a crime for officials at State … including Hillary Clinton herself, who had to be aware of the efforts, since the server was located in her house. And that might be one reason why Bryan Pagliano will take the Fifth, absent a deal.

So concealing Clinton's private email server may have been a criminal conspiracy at State?

Lot's of material from the recent Democratic presidential debate, as a few die-hards pore it for details. For example, Hillary said there was "systemic racism" by America's  police, which, naturally, she proposes to fix by nationalizing the police departments of America. Unsurprisingly, she cited the long debunked gender wage gap Women cheer for Hillary Clinton's gender wage gap lie, and promised "equal pay for women's work," which, when you look at it carefully, is a promise to pay women more for less work. She also promised "No one will defend ObamaCare better than me!" clearly a play to peel off some of some of Bernie's less fervent communist supporters. Bernie, of course, wants to nationalize medicine with universal Medicare. Probably not the best position for the national election, where Obamacare remains unpopular, but hey, you have to run to win. Of course Clinton was 'outraged' by inaction over Flint lead contamination, and demanded the resignation of Gov. Rick Snyder (R), while glossing over the roles of the Flint city bureaucracy (D), Michigan DEQ (presumably staffed largely by democrats) and the EPA, almost entirely staffed with democrats and true believers), who knew long before Snyder how effed up the situation was. Finally, Did Hillary just make Bill fair game in the 2016 election when she named him as one of her trusted advisers? According to Callum Borchers of the Washington Post, she did. I think he's been fair game for a long time, but having someone (else) at the Post admit it? That's something.

And from The Other McCain: Democrats Against Justice


The Democrat Party is a criminal protection racket:


If you are a Democrat, the safest place in the world to be is under the authority of other Democrats. Lois Lerner, the criminal who used the Internal Revenue Service as a political weapon on behalf of the Democratic party, was never going to be charged, or even disciplined, by her overseers in the IRS or at the Department of Justice. After pulling one of the worst Gestapo stunts in modern American history, she’s receiving a nice, comfortable pension, and those who enabled her crimes were given fat bonuses. There was no way that Eric Holder or Loretta Lynch was going to charge Lerner — what do you imagine the odds are that they’ll discover their integrity in the matter of Hillary Rodham Clinton, presumptive Democratic presidential nominee?

Speaking of "The Big Dog" did you realize that TODAY IN HISTORY: Bill Clinton Admitted Lying About His Affair With Monica Lewinsky in order to avoid indictment, on his last day in office? Video at link for millennials who have forgotten were too busy playing Mario Cart.


Under an agreement with Independent Counsel Robert Ray, Clinton’s law license will be suspended for five years and he will pay a $25,000 fine to Arkansas bar officials. He also gave up any claim to repayment of his legal fees in the matter. In return, Ray will end the 7-year-old Whitewater probe that has shadowed most of Clinton’s two terms.

The Clinton News Network whines that Donald Trump uses Bill Clinton's past to haunt Hillary. And according the UK Daily mail, a new bimbo has erupted "Anonymous phone calls, fears of stalking and veiled threats: How power-hungry Hillary torpedoed the torrid affair between Bill Clinton and 21-year-old campaign worker that threatened to destroy her master plan to become president"


Driven and ambitious, Hillary did every catty thing to break up the relationship and keep Bill for herself, based not on love, as Marla Crider perceived it back then in 1974 Arkansas, but rather on a 'secret pact' that Bill and Hillary had forged for their future – that they'd work together as a disciplined team so that one day he, and hopefully later she, would be elected president.

Trump starts focusing on "The Big Cat" as he rents an Iowa theater to show Benghazi movie. The movie, which never mentions Hillary Clinton, is reputed to show how the Obama administration left the Benghazi personnel to die. According to Andrea Tanataros "If Anyone Sees ’13 Hours’ and Goes on to Vote for Hillary ‘They’re a Criminal’" No, not a criminal, just an moron, even without the film. As found in Wombat-socho's "In The Mailbox: 01.18.16"     BENGHAZI WITNESS CONFIRMS WHAT HILLARY HAS BEEN HIDING: SHE’S IN TROUBLE


Rep.Trey Gowdy, chairman of the House Select Committee on Benghazi, said Wednesday that a number of witnesses had confirmed a stand-down order was given to military assets in proximity to Benghazi the night of the 2012 terror attack…

Speaking of morons, Why is George Stephanopoulos even allowed to cover Clinton campaign? 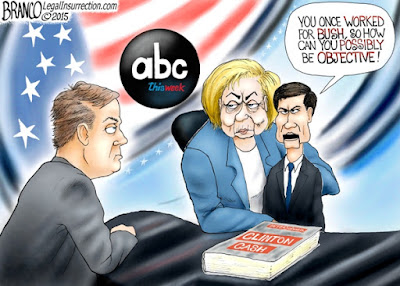