I didn't have time between fishing to clean up yesterday, so there's a double dose. Moreover, the topics of the articles are mostly different, and defy combining into threads.

Confirming her long held feelings that she is above the law, the State Dept jumped through “quite unusual” hoops to allow Hillary attorney to keep classified info. The story of How the State Department Caved to Hillary Clinton’s Lawyer on Classified Emails.

Not really totally a Clinton matter, (Obama deserves the lions share of the credit) according to Trey Gowdy Witnesses have confirmed stand-down order on night of Benghazi.


Gowdy said "there were no assets that could have gotten there" in time to save Ambassador Chris Stevens and Sean Smith, two Benghazi victims who died of smoke inhalation earlier in the evening of Sept. 11, 2012.

But he noted the question of whether assets could have arrived in time to save the other two victims, Glen Doherty and Tyrone Woods, was "eminently fair."

Then Benghazi Victim’s Mother SCREAMS: “Hillary Is a Liar!” After Watching ’13 Hours’

It's not like anyone in the Administration cared what happened to a couple of CIA contractors.

In Hillary's last email tranche, more evidence of the coordination between the MSM and the democrats,  New Yorker's Jane Mayer Tipped Off Hillary Clinton to Unpublished NYT Story. I expect Sid "the Shiv" Blumenthal to be head of some dark agency in a hypothetical Clinton administration.

In what could be good or bad news for Hillary, depending on how this goes, Justices to Hear Appeal by Bob McDonnell, Ex-Governor of Virginia. As you may be aware, McDonnell was convicted in federal court of corruption for taking legal gifts from a diet supplement company and then extending them the the courtesy of making introductions to government workers. I can't imagine any of that goes on with Clinton.com, can you?

We have all been here before: Sanders' Surge Threatens a Replay of 2008 for Clinton. According to Althouse You know, it was one thing to lose to this amazing, disarming political shooting star Barack Obama.


But to lose to the elderly socialist who's not even especially trying to win, just getting his ideas out there and providing some balance, lest everything slide to the right. That's downright humiliating.

And provides this helpful infographic: 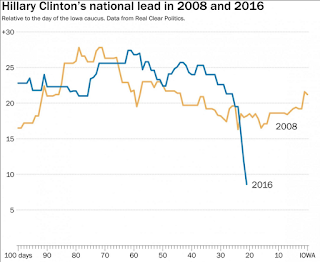 Even Joe Biden piles on. It seems like, with few exceptions, to know her is not to like her.

One of those exceptions (well, maybe), Hillary Uses Her Daughter To Deliver Absurd Attack Lines, Trusting that Protectiveness Over Once Off-Limits Chelsea Will Immunize Her Against Blowback


She had Chelsea go out there and tell people Bernie Sanders was going to take away their health care, without noting Sanders' plan is actually for single-payer, which would replace their current health care.

What a woman. What a mom.

Even Vox: Hillary Clinton doesn't trust you. The feeling is mutual, my dear.

More evidence that Hillary intends to get your money for her programs without endangering her own: Clinton's Estate-Tax Plan Doesn't Address Her Own Tax Planning, her plans for tax "reform" "didn’t address the candidate’s own moves to shield at least part of the value of her New York home from the estate tax."

On the lighter side, I'm sure she intended to give any proceeds back to the government: Why yes, I did buy a Powerball ticket. Nope, she said she'd spend it on her campaign.


The most amusing part of this is it wouldn’t be enough anyway. At $1.5 billion, the 30-year annuity would pay $50 million a year before taxes, which would probably eat up at least half. (By the way, that gross is slightly less than the $57 million that the Clintons earned during the four years Hillary was Secretary of State.) The cash-out option — assuming there is one for a prize this large — is $930 million, of which again half or more would go to taxes. Let’s say for the sake of argument that this leaves a half-billion dollars; that might be a lot to dump into a campaign, but it’s not enough to self-fund.