Clinton.com Keeps On Keepin' On

I was hoping to skip day, but there's just too much to ignore.

The State Dept. email scandal plows forward. A Hillary spokesman narrowly avoids calling the new revelations that her email server hosted unsecured super top secret data "a right-wing conspiracy" and settled for saying it was "highly coordinated with Republicans". I wish. Unfortunately for Hillary, the IG was appointed by Obama. Now, it is possible that Obama has it in for her at this point, and wants Biden, Warren or Sanders warming his throne. Former Judge Andrew Napolitano, suggests that New Revelations Make Hillary 'Prime Candidate for Prosecution' and that the situation for Hillary is "overwhelming, damning and grave", and that she should get a really good "national defense" lawyer. It's hard to imagine that the Clinton Foundation can't afford one. What Happens if Hillary Isn't Indicted?


The most obvious part is that the rule of law will have, for all intents and purposes, ended in the United States. Equal justice flew out the window. How does the public react to that? A good portion of it will roll over, but a certain percentage will not. Their reactions will be contingent on a number of things -- whether Clinton is elected anyway (unlikely at this point, but possible), the steadfastness of opposition politicians and media, etc. . .

Sadly, under President Obama, that may actually be the goal. Equal justice has never been part of the program.  Can we count on FBI director James Comey's Integrity?


Few are taking note of the precipice on which we stand now. FBI Director James B. Comey’s in basket is now rapidly filling with irrefutable evidence that Hillary Clinton did cross several red lines. And Comey is rapidly coming to that moment when he, and he alone, must decide if the “case” is to be turned over to the attorney-general for prosecution.

ONCE THEY DECIDE HILLARY CAN’T WIN, THEY MAY ACTUALLY start to pay attention. 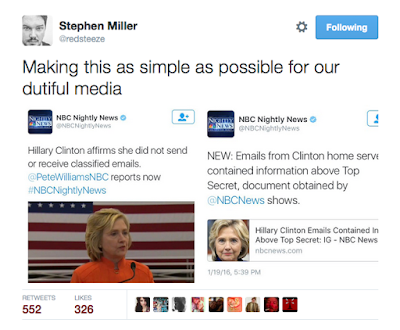 Aside from the illegality of her personal email server, there remains the fact that her actual performance as Secretary of State was abysmal. On defense, Hillary Clinton faces more incoming fire


Americans can decide who they want to believe: the people who actually lived through the 13-hour attack or the bungling and partisan bureaucrats who have yet to take full responsibility for the tragedy that happened on their watch. “The truth is not partisan,” Paronto told me. Or at least it shouldn’t be.

Has ‘Clinton Normal’ Caught Up with Hillary?


For 40 years, whenever Hillary Clinton opened her mouth, there has been a better-than-even chance she was lying about something. It has never mattered a whole lot what she was lying about, most of us have just come to expect it. . .

Read the whole thing. To put it in videos, so even millennials will understand:


Even some Democrats who participated in the effort to discredit the women acknowledge privately that today, when Mrs. Clinton and other women have pleaded with the authorities on college campuses and in workplaces to take any allegation of sexual assault and sexual harassment seriously, such a campaign to attack the women’s character would be unacceptable.

Juanita Brodderick relates how, back in the good old days, NBC kept her allegations about Hillary's role in suppressing her story of the air.


Billionaire environmental activist Tom Steyer said he is not ready to endorse Hillary Clinton, and he would be open to supporting her main rival, Bernie Sanders, if he becomes the Democratic nominee for president.