A really big day of news at Clinton.com, so hang on.

You may have heard, the democrats decided to hold a presidential debate the same night that the NFL was having a playoff. It seems like they're actively trying to keep Hillary out of the news until she's disposed of her left(er)wing competition. But the big question being sought by the public is  'Will Hillary Clinton get prosecuted?'  the Top Google search.  Kevin Williamson at National Review Online has my opinion, Being a Democrat means never paying the price. Asked by Jake Tapper if the FBI has interviewed her regarding her email issues, Hillary says no:


The pause after the question is so long and the head shaking is so extensive — continuing even as Tapper moves on to thanking her for doing the show — that I felt sure she was lying. I thought the interesting question was not whether she was lying but how it felt — inside her head — from 0:08 to 0:10.5 as she decided a straight, one-word lie was the best approach. She must have calculated the risks and made a rough stab at how — if the fact of an interview ever comes out — she would do a depends-on-what-the-meaning-of-is-is explanation.

Because she's been so deeply involved  HILLARY: ‘I KNOW HOW MUCH MONEY INFLUENCES POLITICAL DECISION-MAKING’ Hen house, meet fox.


A statement she may come to regret:

Speaking of money and politics, WAPO: INSPECTOR GENERAL ISSUES ALERT OVER $6 BILLION IN MISSING STATE DEPT. MONEY. The State Dept had no Inspector General during most of Clinton's tenure there.


Rich died in 2013. But his business partners, lawyers, advisers and friends have showered millions of dollars on the Clintons in the decade and a half following the scandal.

. . . There’s the official Clintonite narrative, in which the former president strayed with Gennifer Flowers and Monica Lewinsky, was forgiven by his wife and daughter, and deserves to have his repentance respected.

Then there’s the narrative that I suspect most Americans believe, in which the former president was much more of a tomcat in Arkansas, and probably has tomcatted occasionally in his post-presidency — but always consensually, and lately in ways that have minimized exposure or embarrassment.

If either of these narratives are true, then Clinton’s sex life will be a non-issue in 2016. If an adulterer, even a frequent adulterer, is all he is, then an America that didn’t want him impeached in the 1990s isn’t going to object to having him as the First Gentlemen today.
But suppose you believe the Broaddrick story. Liberals dismissed it during the impeachment days, but if you read the summary of the case from the (mostly liberal) Dylan Matthews at the (mostly liberal) website Vox, this dismissal looks unfair. There’s an inescapable he-said/she-said dynamic, but one need not be a “believe all rape allegations” absolutist to find her claim persuasive. . .


Klein revealed that he has separately heard similar stories off the air from two other Clinton sexual assault accusers, including one of the most famous of Clinton’s accusers. He said the accusers said they never made that part of the story public because they just didn’t focus on it.

Linda Tripp: ‘Bill Had Affairs with Thousands of Women’


She charged that Hillary Clinton not only knew about her husband’s exploits, “She made it her personal mission to disseminate information and destroy the women with whom he dallied.”

Tripp says she cringes at the sight of Clinton presenting herself as “a champion of women’s rights worldwide in a global fashion, and yet all of the women she has destroyed over the years to ensure her political viability continues is sickening to me.”

But "Big Dog" is getting old: Bill Clinton’s hand trembles at Iowa rally — blames old age. One woman requests Hillary, Please Leave Bill at Home. But, it turns out Bill may not matter that much either way:  For better or worse, Bill Clinton not a big factor among U.S. voters: poll.

Jake Tapper accused Hillary of "muddying up" Chelsea by using her as an attack dog with a remark that was patently false. "It's a sad commentary that Hilary Clinton's campaign sees her mistake as a failure to 'undercut' Bernie Sanders..." "... rather than a failure to realize just how desperately many people are seeking what Bernie has to offer. She had a lot of time to get out in front of that parade."


I know there's another guy. I'm sure his utter irrelevance has some meaning. What gets me is the cession of the party to the Clintons. How can a party be so inert, so uninspiring? Why did Obama leave it in such a condition that it should offer up only the elderly woman who lost to him 8 years ago, offer her up as if she's so decidedly right that no one else should even compete? What deadness! Such deadness that a significantly more elderly man drops in and feels like the future. How could a party lapse into this predicament?

Ace has a Movie Review: 13 Hours, A Great Movie and an Enormous, Enormous Problem for Hillary. Remember, a movie the Hillary regarded as unfair to her was the subject of the Citizens United ruling:


Hillary: The Movie is a 2008 political documentary about United States Senator and presidential candidate Hillary Clinton. It was produced by Citizens United. The film was scheduled to be offered as video-on-demand on cable TV right before the Democratic primaries in January 2008, but the federal government blocked it. The blocking of the film's airing was the subject of the court case Citizens United v. Federal Election Commission. The documentary interviewed various conservative figures such as Dick Morris and Ann Coulter and reviewed various scandals in which Hillary Clinton allegedly participated in, such as the White House travel office controversy, White House FBI files controversy, Whitewater controversy, and cattle future controversy. 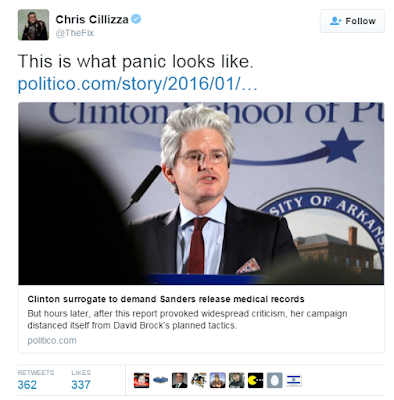