"Climate Change Made Me Do It!"

A jury in Snohomish County, Washington finds climate activists not guilty of  obstruction for blockading a regional oil facility in 2014. Can Breaking the Law Be a Legal Defense?

When our grandchildren write the history of the climate movement, they’ll save a few pages for the trials of 2016.

First, they’ll focus on Snohomish County, Washington, where last Friday a group of Seattle-area jurors found the so-called Delta 5 not guilty of obstruction for blockading a regional oil facility in 2014. The protest and the acquittal were notable as part of a growing wave of anti-oil-gas-and-coal citizen actions that has swept the country in the past few years, and the courtroom in Snohomish County was treated to a master class on why principled lawbreaking is just the tonic needed to cure our government’s woeful inaction on warming.

But what law students of the future will learn about the Delta 5 trial is something a bit more arcane, if no less momentous. For the first time in the United States, a jury heard testimony that defendants’ criminal actions were justified by “climate necessity”—that is, the argument that it’s better to break the law while getting in a few punches at the fossil fuel system than to sit back and lawfully watch the world burn. It’s a defense that’s been tried a handful of times, but in the U.S. has never made it past the judge’s bench slap. (One group of protesters used it successfully in England in 2008.)

I'm not necessarily unalterably opposed to jury nullification, but one should be careful of precedent. Them yahoos in Alabama and Mississippi might take to it.

In news on the intersection of environmentalism and law, the State of California is suing Exxon for disagreeing with them on climate change. California Joins the Effort to Persecute, Suppress Scientific Dissent on Climate Change


California Attorney General Kamala Harris has joined New York Attorney General Eric Schneiderman in trying to prosecute ExxonMobil for supposedly lying to its shareholders and the public about climate change, according to the Los Angeles Times. The Times reported that Harris is investigating what ExxonMobil “knew about global warming and what the company told investors.”

Neither Harris nor Schneiderman recognizes the outrageousness of what they are doing—which amounts censoring or restricting speech and debate on what is a contentious scientific theory. In fact, they want not just to stop anyone who questions the global warming theory from being able to speak; they want to punish them with possible civil sanctions or even criminal penalties. As I said before about Schneiderman, Harris needs a remedial lesson in the First Amendment.

Perhaps we should investigate what Harris “knows” about global warming or climate change, which Harris (and Schneiderman) treats as if it is a proven, unassailable, incontrovertible fact.  However, as the Heritage Foundation’s Nicolas Loris has pointed out, “flaws discovered in the scientific assessment of climate change have shown that the scientific consensus is not as settled as the public had been led to believe.”

And for the trifecta, Many Climate Economists Reject Climate Models and Turn to Ethical Judgments


. . . For an example of how the 365 economists who responded to the survey were more concerned than the actual published literature, consider the question asking what year would the world start experiencing net negative economic impacts from climate change?

Here is the breakdown of the answers: 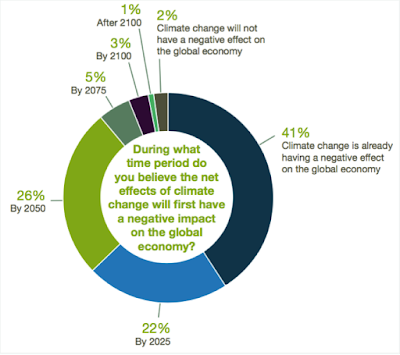 Already, notice that the expert respondents are at odds with the alarmist rhetoric that declares destructive climate change is already upon us. As the numbers indicate, 59 percent—a solid majority—thought that climate change would be beneficial for the global economy at least through the year 2025. Moreover, 37 percent of the experts thought that climate change would be beneficial to the global economy until at least the year 2050. Does this match up with the apocalyptic rhetoric coming from Vox and other quarters?

Yet even though the above survey response may surprise readers who have heard that disaster is imminent, the results in the published literature are even more optimistic. As Roberts reports:

The median answer here is 2025, which is considerably earlier than many prominent economic models estimate. For instance, Tol’s FUND model — one of the three big models used in the field — estimates that impacts will not be net negative until 2080.

In other words, the expert economists are not using the published results in order to justify the answers in the chart above. Their judgment tells them things are worse than the peer-reviewed models indicate, and—to reiterate—even the judgment of 37 percent think climate change will help the economy through 2050.
. . .
The irony here is incredible. Americans have been beaten over the head for years about the “settled science” of the peer-reviewed research, and the Obama Administration assembled an Interagency Working Group that has spent years calculating and updating estimates of the “social cost of carbon.” We at IER have reported on all of the problems with these models, and cited MIT economist Robert Pindyck’s scathing critique. Now guys like Roberts are coming along and effectively saying, “I don’t care about the peer-reviewed literature that the IPCC uses, or the models chosen by the Obama Working Group. Let’s make policy by conducting a survey to see what the group thinks.”

Proving only that economists are susceptible to propaganda too.
Posted by Fritz at 5:00 AM