Remember how the Washington Post and a host of media outlets rushed to assure us that Ebola could not be transmitted by air, so we shouldn't be worried about Ebola patients riding public transit, etc? Well, not so fast: Limited airborne transmission of Ebola is ‘very likely,’ new analysis says

A team of prominent researchers suggested Thursday that limited airborne transmission of the Ebola virus is "very likely," a hypothesis that could reignite the debate that started last fall after one of the scientists offered the same opinion.

"It is very likely that at least some degree of Ebola virus transmission currently occurs via infectious aerosols generated from the gastrointestinal tract, the respiratory tract, or medical procedures, although this has been difficult to definitively demonstrate or rule out, since those exposed to infectious aerosols also are most likely to be in close proximity to, and in direct contact with, an infected case," the scientists wrote. Their peer-reviewed analysis was published in mBio, a journal of the American Society of Microbiology.

The paper's lead author, Michael T. Osterholm, an epidemiologist at the Center for Infectious Disease Research and Policy at the University of Minnesota, touched off a small furor and was condemned by some experts last Sept. 11 when he raised the same possibility in an op-ed piece in the New York Times as concern over the spread of the deadly disease was increasing rapidly.

We know that Ebola is not a terribly contagious disease, with an r-nought of 2, meaning each patient infects 2 new patients in an unprotected population, compared with an r-nought of over 14 for measles (get your kids vaccinated, you idiots). So under the worst of conditions, an Ebola outbreak is barely rumbling along. 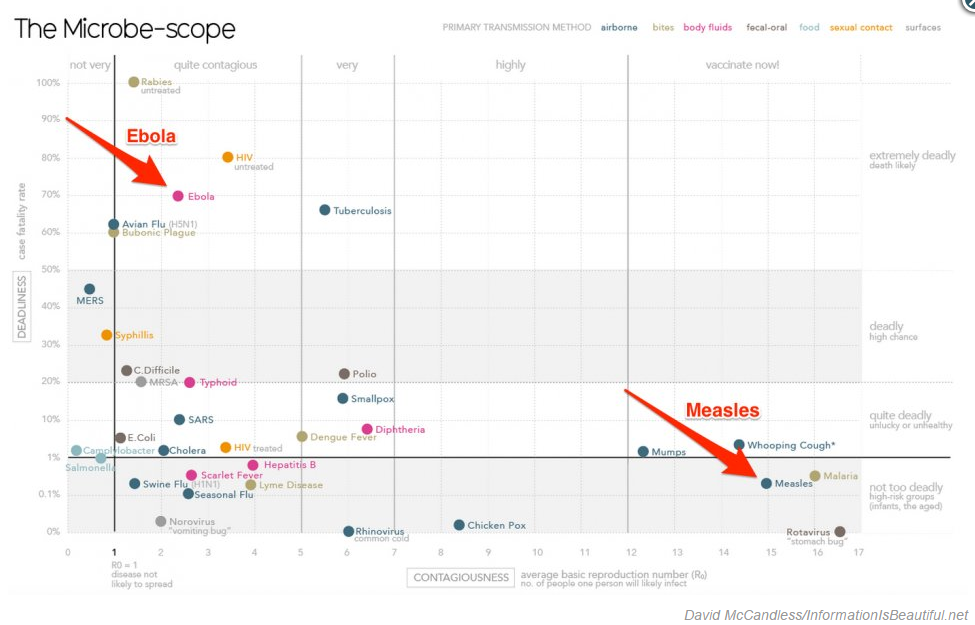 You might also remember that Politifact named George Will's assertion that airborne transmission just might be possible as the "Lie of the Year" for 2014. As HotAir noted: PolitiFact’s Lie of the Year of 2014 falls apart only two months later


In October, the columnist George Will directly contradicted the president and a variety of federal health officials when he insisted that the African hemorrhagic fever Ebola could spread via fluids expectorated as a result of a cough or a sneeze. The president’s honor had been called into question, an offense that Rudy Giuliani recently discovered the press simply cannot countenance. Even despite the fact that a Centers for Disease Control and Prevention poster backed up Will’s warning, PolitiFact dubbed his and other alleged exaggerations of the threat posed by Ebola as their LOTY.

The medical literature says sneezing and coughing are not part of the disease’s typical symptoms, and experts we reached drew a bright line between what might happen in a hospital isolation ward and a person with early symptoms of Ebola before he or she is admitted.
There is no evidence that Ebola has been transmitted in the general public through coughing or sneezing.
Will took a medical commentary out of context. We rate the claim False.

“PolitiFact has determined that is a sweeter objective to score political points against Republicans than to hold Obama responsible for the collapse of his principle mandate as president – to extricate America from Middle Eastern wars,”

Fact checkers have become a joke.  As I heard yesterday in another context, every movement becomes a business, and eventually a scam. The speed of progression with "fact checking" has been startlingly quick.
Posted by Fritz at 5:15 PM