From Moe Lane by way of Insty: Somebody is not happy 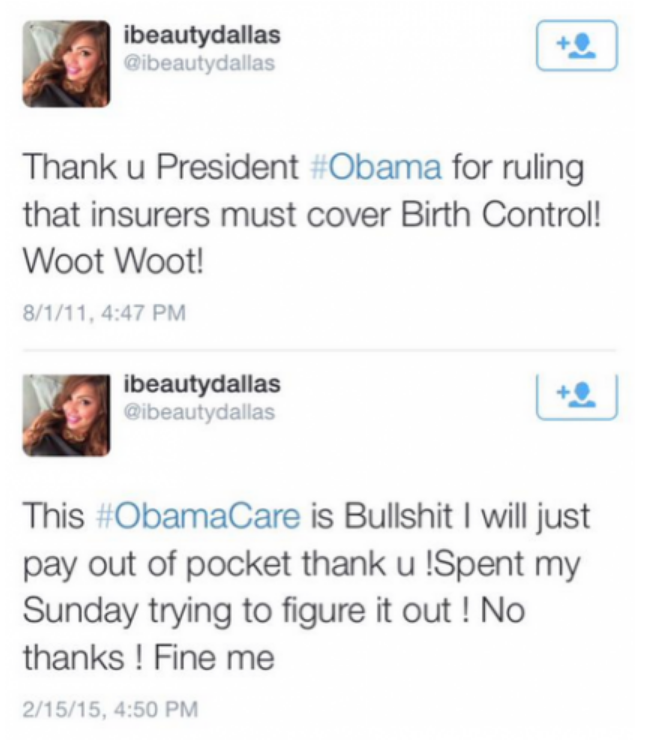 Sorry, honey. He lied to you and now you’re stuck holding the bag. Some men are like that, you know.

Another satisfied customer: How One Nebraska Woman Lost Her Health Insurance Three Times Under Obamacare

The day after Christmas, Weldin, of Minatare, Neb., had logged on to Facebook to find a message from a friend of hers. Included in the note was a link to anarticle from the Omaha World-Herald announcing that CoOportunity Health, a nonprofit health insurance company offering plans in Nebraska and Iowa, had been taken over by state regulators.

The insurer, one of 23 Consumer Operated and Oriented Plans, or co-ops, started with the backing of the federal government and received $145 million in loans from the Centers for Medicare and Medicaid Services. But, CoOportunity’s expenses and medical claims would far exceed its revenue for 2014.
. . .
In the months leading up to the Affordable Care Act’s implementation on Oct. 1, 2013, millions of Americans began receiving notices from their health insurance companies informing them their policies had been cancelled.

Weldin was one of them.

The Nebraska woman, who was diagnosed with carpal tunnel syndrome 15 years ago, had purchased catastrophic coverage through Humana after moving from San Diego, Calif., which she kept until 2013—right before Obamacare’s implementation.
. . .
Weldin’s insurance with CoOportunity went into effect Jan. 1, 2014, and she had the insurance for most of that year.

Like some consumers, Weldin had issues with the coverage she received through the law. Her original doctor, located seven hours away in Colorado, was no longer in network, and Weldin’s plan included services she would never need. At 58 years old, the former dental hygienist had a difficult time understanding why she would need maternity coverage, but it was included in her plan.

Her new platinum plan included a $2,500 deductible, and Weldin qualified for the tax credits touted by the administration.

Then, in November 2014, CoOportunity notified Weldin that they would no longer be offering platinum plans.


But society has generally settled on some rough intuitive rules, which I'll try to make explicit:

1. We don't force people to do things in order to produce positive externalities. My neighbors probably got some modest enhancement in their property values when we replaced our horrid old falling-apart chain-link fence with nice new wrought iron. It's possible that society would be better off if everyone had to replace their fences with wrought iron. But we cannot mandate everything that produces a positive externality. . .

2. Basic rights can't be violated because they upset someone else.There's a lot of speech out there that causes far more harm than it generates in open public discourse. You still have the right to say it. Promiscuous sexual activity spreads diseases, some of which are very hard to treat. The public health police still can't stop you from getting your groove on . . .

3. You can't have created the situation that you are now trying to fix. Say I have a farm in the middle of nowhere. You come out and build a bunch of new McMansions with granite countertops and recessed lighting and all the modern conveniences. Suddenly, the pungent smell of cow manure is a negative externality for all the folks in the development, who complain to their local government. Most of us would not say that you have the right to force me to stop farming because it's ruining the ambience of the development that you decided to build.

So now let's talk about the individual mandate, which fails on at least two of three points. Start with No. 3: Many of the complaints about externalities rely on a massive amount of public spending on health care or laws such as the Emergency Medical Treatment & Labor Act (which forces emergency rooms to treat people even if they can't pay). It's extremely dangerous to allow the government to say, "Well, we passed this law, and as a result you're costing people a bunch of money, so we're now entitled to pass this other law to dictate your behavior." It's far too easy to build a pyramid of laws that entitle the government to do anything at all, because earlier laws have made your various liberties rather costly.

It also fails on No. 1: We are not trying to stop people from doing something that harms others so much as to force them to do something that would make others better off by enabling them to buy cheaper health insurance. (It's irrelevant to this point whether you think I would also be better off, because Professor Frakt asked specifically about externalities.) I am in general extremely skeptical of those sorts of arguments for anything short of World War II.

I also think it fails on No. 2, by the way; I think people have a right to determine where their own money goes and what products they spend it on -- even if that means they can choose to forgo a very beneficial product that would make everyone better off. Now, I do not think this right is entirely unlimited -- parents can be forced to support their children, for example, and I think that's entirely just.

And that's just the short version.

The Washington Post has a sob story about a poor woman, a "5th generation Republican" who would potentially loose out if Supreme Court decides against Obamacare in King versus Burwell:


Now that she has coverage, she doesn’t want to lose it. “I can still feed my kids and put gas in my car,” she said. “I’m not trying to go to Cancun or carry a Michael Kors bag. I drive a 2009 Mazda, and I’m just trying to make it in my little apartment and not be on government assistance.”

Meredith is one of about 6 million people whose subsidized insurance hangs in the balance as the Supreme Court takes up a case that poses the most serious challenge to the Affordable Care Act since the court found the law constitutional more than two years ago.

Paul Mirengoff at Powerline notes:  TALK ABOUT WORKING THE REFS. . .


Like any other federal income redistribution scheme, though, the Obamacare subsidies can only be maintained if Congress provided for them. Whether Congress did so is the question before the Supreme Court in King v. Burwell.

It’s worth noting, however, that a decision by the Court that Congress didn’t authorize subsidies except in state exchanges wouldn’t preclude subsidies for people like Ms. Meredith. States like Texas that decided not to establish exchanges in the belief that, per the Obama administration’s rulings, lower-income residents would get subsidies via the federal exchange, would revisit the matter knowing now that only by establishing exchanges will these subsidies continue.

This is precisely the condition under which Obamacare’s architects intended states to make their decision, as is clear from both the statutory language and the comments of Jonathan Gruber. Subsidies were limited to state exchanges as a means of inducing states to establish them.

Thus, if the Supreme Court rules against the administration, states like Texas still will be able to maintain the subsidies of people like Erin Meredith by establishing exchanges (the effective date of the ruling could be pushed back to allow time for this). Whether the subsidies are maintained will depend on whether the state favors this redistribution of income.

But take heart. Although Obamacare will probably cost the United States some considerable number of doctors who will drop out due to lower reimbursements, and the added aggravations, Obama wants more IRS agents, in part to administer Obamacare: Obama wants massive spending, staffing increases for IRS in 2016 budget


Thousands of new Internal Revenue Service employees will not be shouldering the regulatory burden Obamacare rules have heaped onto the tax agency, despite IRS claims that it needed massive additional funding to hire such support staff.

Only 483 of the 9,245 new hires President Obama is seeking for the IRS in his 2016 budget proposal would be assigned to work on Obamacare programs, according to a budget summary published by the federal tax agency.

As the agency tasked with enforcing Obamacare’s individual mandate provision, the IRS must for the first time this year assess a fine against people who were eligible for the government-funded health insurance but declined to enroll.
. . .
Some of the new hires not hired directly for Obamacare-related work would be doing chores indirectly related to the health care program. For example, nearly 3,000 new employees would handle problems and questions from taxpayers — many of which will arise from confusing Obamacare rules.