Silver Spoon Leaves a Bad Taste in the Mouth

Determined to make the "best spoon in the world," Dr Zoe Laughlin, director of the Institute of Making, led a study to reveal which material made the best spoon for dining.

Speaking to The Guardian, Laughlin said: "We realised there hasn’t been much research into the taste of different metals, but it really affects how food tastes. If a metal makes something taste sweeter, or richer, then there’s potential to reduce the sugar content in the food itself.”

Coating seven spoons in different metals - copper, chrome, zinc, tin, stainless steel, gold, and silver - volunteers were asked to suck each spoon and give their verdict on the taste. Repeating the test, sweet, salty, and acidic foods were added onto the spoons to test if the material would affect the flavour.

The results revealed gold spoons produced the tastiest results, with or without food. During a BBC Breakfast interview, Laughlin attributed gold's success to its lack of metallic taste: "This is eating as it should be - you just taste the flavour of the food and nothing else. You haven't lived till you've eaten with gold."

Stainless steel produced the second best results whilst silver ranked lowest due to its strong metallic flavour. Laughlin described silver as not being at all pleasant for eating as it reacts badly to acids in fruits and sulphur in eggs.

For sweet foods, copper and zinc coated spoons are the best to use, though avoid cod with zinc spoons as Laughlin's previous study revealed it to be a highly unpleasant mix.

Most metals, even stainless steel, dissolve slightly, especially in acidic solutions; hence the metallic taste. Gold, platinum, and palladium however, are essentially inert to all but the mixture of strong hydrochloric and nitric acids that make up aqua regia.  So if you want a silvery looking spoon that doesn't add that metallic taste, get your silverware made from platinum or palladium. On the bright side, they are both currently cheaper than gold, platinum selling for $1205/oz and palladium for $790 compared to $1228 for gold. 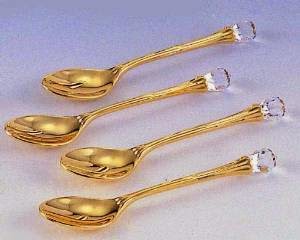 When Georgia and I got married back in 1973, we rejected the idea of the traditional set of silver as a requested wedding gift, and went with a more contemporary set of fancy stainless steel.  Having worn out our original set of utensils (although a few sad specimens remain), we have set the stainless into use as our day to day set. Having silver would have been cool, however, as the price of silver has skyrocketed since 1973, when it was approximately $2/oz, and silver coins were still in common circulation. It is currently at $17/oz, down from a high of $48 in 2011.

However, since platinum and palladium spoons are not commonly made, except as labware for it's exceptional inertness, if you really must have the flavorless spoon, you can find gold-plated spoons here for less than a full arm and a leg.