Scott Walker is So Conservative . . . 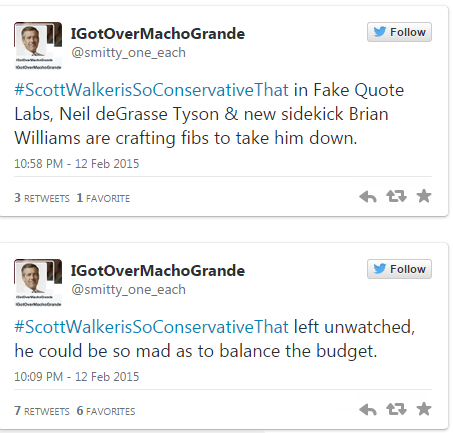 The story of the week is that Scott Walker waffled on support of evolution in a question from a British reporter.  Here are some questions that journalists would be asking democratic politicians if they were really interested in the answers:

What is evolution?
Does human life begin at conception?
Is a 20-week-old unborn child a human being?
Do you believe there are too many people on Earth?
Do you believe GMOs are safe?
Do your chromosomes have anything to do with determining sex? What role do they play in a person’s gender, if any?
Do you believe carbon dioxide is detrimental to human existence?
Do you believe a slight variation in the climate over a century is unique to contemporary times?
What was the average surface temperature of the earth last year?
Is certain birth control correlated with brain cancer?
What is a stem cell, and what are the differences between adult and embryonic stem cells?
Do you ever question settled science?

I've seen another list with some even better question (damned brain is like sieve some days), but since the chance of any of them being asked is negligible, this set will do.
Posted by Fritz at 2:19 PM