To save their depleted species, female blue crabs go the extra mile to spawn in the bay

As females go, so go blue crabs. Last year, scientists estimated that there were only 68.5 million females old enough to spawn, far below the 215 million that officials say are needed to overcome natural threats such as predators and cold — and human threats such as commercial overfishing — without depleting the population. This year’s count is underway by Maryland and Virginia scientists at 1,500 locations.

The blue crab, Maryland’s state crustacean and a symbol of pride for the region as much as a resource, is more threatened now than at any time since biologists started to record numbers in the late 1940s. Both watermen and state officials are deeply worried about blue crabs’ future. Sixty years ago, the Chesapeake Bay yielded 75 percent of the crabs harvested in the United States; now the withered stock yields about 35 percent, according to a report by the Maryland’s natural resources department. 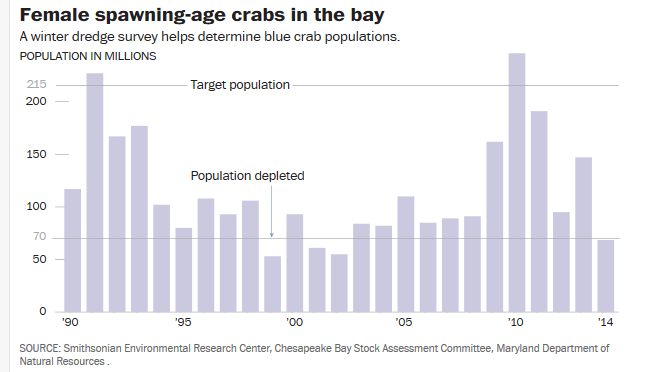 Some watermen say the steps taken by Virginia, Maryland and the Potomac River Fisheries Commission to rescue crabs after the population’s free fall in 2008 haven’t worked. The states cut the number of females that can be fished by about 30 percent. When the stock rose only to fall hard again last year, Virginia cut the number of females that could be fished by an additional 10 percent during the spawning run.

Smithsonian scientists worry that efforts to save females might produce a serious side effect: overfishing males. When male crabs decline, those remaining mate more often, and sometimes can’t regenerate their sperm supply quickly enough, according to a study by the Smithsonian Environmental Research Center.

That's a problem, when the males are overtired from too much sex. Overfishing of males has been going on for years.


“I don’t believe it’s going to get better, doing what we’re doing,” said Bill Mullis, chair of the Virginia Blue Crab Industry Panel of commercial fishermen and owner of B&C Seafood, based in Newport News, Va. “We’ve been doing this eight years and the stock is the same as it was when it was declared a disaster. It’s like disaster has become the status quo.”

Virginia Marine Resources Commissioner John Bull disagreed, saying regulations worked. The population rose over four years to a 21-year high of 765 million in 2012, then dropped like a stone the next two years.

Crab populations are notoriously variable, with bad years following good years with no apparent reason (other than weather, perhaps) since the fishery has been recorded.


“We’re not happy with the status of the crab stock,” Bull said. “But fishery managers are stunned by the curveball Mother Nature has thrown at us.”

Bull said female crabs and their offspring were hit by forces managers couldn’t control in the past two years. A plague of red drum fish that prey heavily on juvenile crabs decimated them in 2013. At the same time, grasses that conceal juveniles diminished.

Although red fish do like their crabs but I have a hard time believing there were enough of them in that year to make much of a dent in the crabs, even if they were having a hard time for other reasons. Croakers and Striped Bass also eat plenty of small crabs, and their populations have been declining over the period.


“Baby crabs didn’t have a place to hide, and they were dinner,” Bull said. The next year, things got worse. Managers worked successfully to reduce the red drum by fishing them out, but another problem came out of nowhere.

A harsh and sudden winter wiped out nearly 30 percent of adult crabs, marine scientists in Maryland and Virginia said, ending any hope for a fast rebound. The total weight of crabs watermen harvested in 2014 was 37 million pounds, the lowest ever recorded.