Degrees F here this morning according to the deck thermometer. According to last night's forecast, Southern Maryland is in the bulls zone for the next winter storm, already affecting Virginia, West Virginia and points east. We're told to expect 8-12 inches of light, dry snow between tonight (Monday) and Tuesday morning. Our first significant snow. Oh goody!

The Weather Channel has named this one Octavia:


Winter storm OCTAVIA will put down a long swath of wintry precipitation from Oklahoma through the Mid-Mississippi and Tennessee Valley, the Carolinas, Mid-Atlantic and finally up along the Northeast Coast in the Sunday night through Wednesday morning time frame. This system has a very different personality than the last couple named winter storms that have impacted the Northeast since it will feature several types of wintry precipitation.

Along the northern edge of the swath of precipitation double digit snowfalls are likely as moisture if lifted over a deep layer of very cold air. Along the southern edge, a mix of sleet and freezing rain is likely. Recent model runs have trended northward with the wintry precipitation so that areas that we earlier expected to be all snow events like Nashville have trended toward a wintry mix and highest snowfall now displaced across Kentucky. Farther south, cities such as Atlanta may be out of the higher impact wintry precipitation as temperatures rise to near 40 during Monday, though early Monday morning the combination of temperatures below 32 degrees and light rain or drizzle could ice up roadways.

The storm will move to the east coast where cold air damming will support freezing rain in places like Charlotte to Raleigh Monday night into Tuesday morning. Farther north significant snow could fall from Richmond to in Washington DC and Baltimore for the Tuesday morning rush hour. As much as 5-8" of snow in Washington DC would eclipse their entire seasonal snowfall which sits just below 4". Finally several inches of snow are also possible from New York City to snow weary coastal New England as OCTAVIA turns northeast up the Atlantic Coast.

Below are the GFC weather forecasts for snowfall and ice issued Sunday afternoon for OCTAVIA. Please be aware that due to slight shifts in the track of the Low these forecasts of precipitation type could change as well. 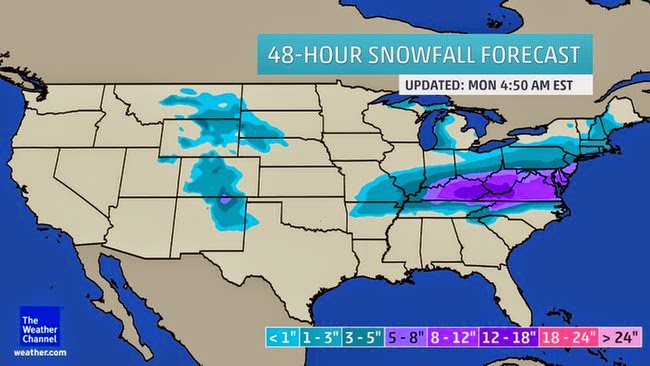