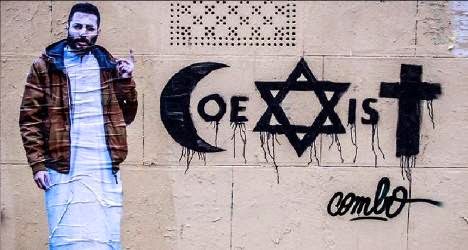 It seems like something one would be hard pressed to disagree with: the word “coexist,” written on a wall using a Muslim crescent as the letter “C,” a Star of David as the letter “X,” and a Christian cross as a “T.”

But in Paris, this particular iteration of the popular inscription—here, created by the street artist Combo, who also pasted a life-size photo of himself next to it—didn’t go down well with everybody. Le Monde reports that four young people asked the artist to remove it last weekend, and beat him up severely when he refused to do so.

Combo ended up with a dislocated shoulder and many bruises.

The attack is characteristic of the inter-religious tensions that plague France and have been exacerbated by the Charlie Hebdo tragedy (see 12 Killed at Magazine Previously Attacked for Satirical Cartoons). Combo declined to discuss the identity of his assailants. “It would only add fuel to the fire,” he told the French newspaper.

That's not too dissimilar from the Coexist bumper sticker commonly seen around college campuses:

Could this be taken as a sign of intolerance? Jonathon Chait, call your office. In the meantime, liberals might consider scraping it off to avoid pissing off one of their interest groups.
Posted by Fritz at 2:45 PM