Marine police have had numerous complaints about poaching in the southern branch of the Elizabeth River over the last two weeks, according to Marine Police Officer Bill Thompson. Marine police had found many untended, illegal and hidden nets that had trapped and killed between 4,000 and 5,000 pounds of protected fish species in that waterway recently.

On Friday, the marine police were notified of some suspicious activity in an area known as The Cove on the Elizabeth River, so they set up a sting operation around noon on Friday.

Around midnight, the police caught their first suspect as he returned to the dock. His boat was filled to the brim with hundreds of red drum and speckled trout — both protected trophy fish with stringent rules about the size and number you can catch and keep. The small 12-foot boat was so full that some officers were surprised it was still afloat. 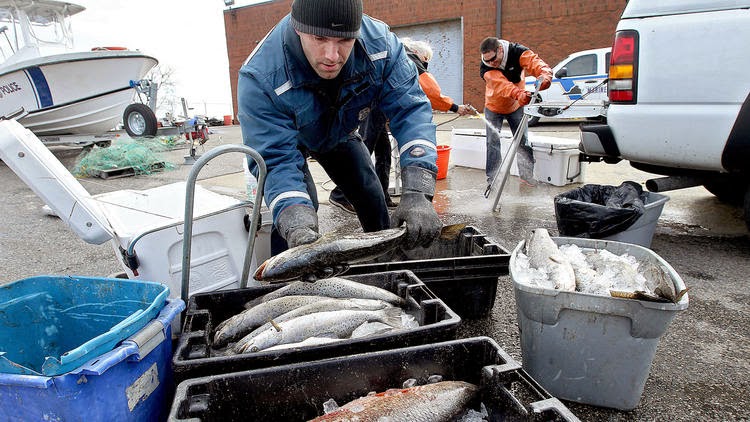 "Of these hundreds of fish, almost all of them, about 98 percent of them, are over the legal size limit," Thompson said. "This was a complete disregard for the species and for the fisheries. This was poaching on a large scale."

After they had arrested and processed the first suspect, they saw a second small boat sliding across the water. Police came up on the boat and a second suspect as the man was hauling in the fish.

Both Yuan Li of Chesapeake and Bi Chen of Norfolk have been charged with several Class 1 misdemeanors and there are several felony charges still pending, according to Thompson. The men will likely face jail time and fines, but how much was not clear on Saturday.
. . .
"They're claiming it was for recreational use to celebrate the Chinese New Year, but they've got to have a market they've been selling to," Thompson said, citing the size of the haul from just Friday night — hundreds of fish weighing around 3,000 pounds, orders of magnitude above the legal weight limit for catching the fish.

Thousands of pounds for personal use? Must be a big family.
Posted by Fritz at 5:00 AM