Yes, It's Good, Living on a Farm

A Cure for the Allergy Epidemic?


Depending on the study and population, the prevalence of allergic disease and asthma increased between two- and threefold in the late 20th century, a mysterious trend often called the “allergy epidemic.”

These days, one in five American children have a respiratory allergy like hay fever, and nearly one in 10 have asthma.

Nine people die daily from asthma attacks. While the increase in respiratory allergies shows some signs of leveling off, the prevalence of food and skin allergies continues to rise. Five percent of children are allergic to peanuts, milk and other foods, half again as many as 15 years ago. And each new generation seems to have more severe, potentially life-threatening allergic reactions than the last. 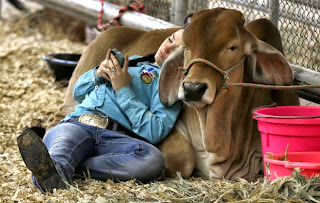 As a former asthma sufferer (mine disappeared mysteriously after I grew up), I have a lot of sympathy.  Childhood asthma is a curse.  I still have some hay fever type allergy, but it's fairly mild.

Some time ago, I visited a place where seemingly protective microbes occurred spontaneously. It wasn’t a spotless laboratory in some university somewhere. It was a manure-spattered cowshed in Indiana’s Amish country.

My guide was Mark Holbreich, an allergist in Indianapolis. He’d recently discovered that the Amish people who lived in the northern part of the state were remarkably free of allergies and asthma.

I wonder about the Amish and Mennonites in Southern Maryland.  We have a substantial community of them, primarily in St. Mary's county, but I've never heard if they have the apparent allergy resistance of the Indiana clans.   They certainly have the same manure-splattered lifestyle.


About half of Americans have evidence of allergic sensitization, which increases the risk of allergic disease. But judging from skin-prick tests, just 7.2 percent of the 138 Amish children who Dr. Holbreich tested were sensitized to tree pollens and other allergens. That yawning difference positions the Indiana Amish among the least allergic populations ever described in the developed world.

He should look into the Maryland and Pennsylvania populations as well.


This invulnerability isn’t likely to be genetic. The Amish originally came to the United States from the German-speaking part of Switzerland, and these days Swiss children, a genetically similar population, are about as allergic as Americans.

Ninety-two percent of the Amish children Dr. Holbreich tested either lived on farms or visited one frequently. Farming, Dr. Holbreich thinks, is the Amish secret. This idea has some history. Since the late 1990s, European scientists have investigated what they call the “farm effect.” The working hypothesis is that innocuous cowshed microbes, plant material and raw milk protect farming children by favorably stimulating their immune systems throughout life, particularly early on.

I am inclined to believe this hypothesis. So, mothers, try to get over that germophobia that you get from watching Swifter commercials on TV.  Let the kids wallow in the dirt a little, and have a few pets.  Who knows, you might grow to enjoy them, too. Sadly, it's not likely to help those of us who have already grown up.

Linked at The Classic Liberal in his Rule 5 round up "The Pretty Reckless — Going To Hell."  Wombat-Socho's grand compilation of Rule 5 posts,  "Rule 5 Monday: Palate Cleanser" is up at The Other McCain.
Posted by Fritz at 6:00 AM