A 17-pound, 6-ounce northern snakehead snagged by a Virginia man has been certified a world record catch of the invasive species some call “Frankenfish.”

The monster was hauled in by Caleb Newton in Aquia Creek on June 1.

“His record has been approved and we’ll be sending the certificate later this week, or early next week,” said Jack Vitek, world-record coordinator for the Florida-based IGFA.

Newton, 27, was fishing with a friend in a tournament when he hooked the monster. “It took me about a minute to get it in the boat,” the Spotsylvania County plumber said after the catch.

The 3-foot-long fish barely fit in his cooler.


This is not a picture of it, but a picture of a large one that was being carried off the boat ramp the afternoon Tom and I went fishing with Capt. Mike: 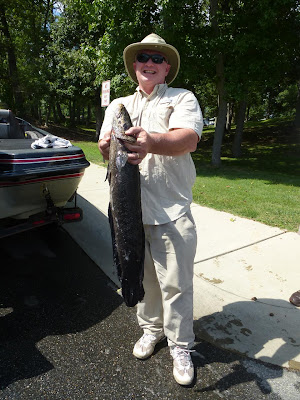 I didn't hear measurements, or catch the name of the guy that caught it, but it is certainly in the that size range.  Capt. Mike was worried it might be one of his "pets..."

Oh, and by the way, we had our snakehead for dinner the next night, and it was excellent.