Whitewater Rafting and Yakking the Trinity 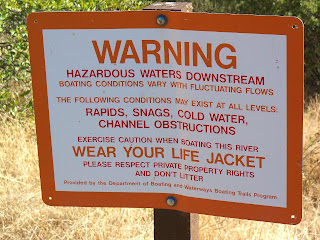 Today's challenge was a float trip down the Trinity River, California, arranged by Mary.  We drove out of the coast fog, into the coast range to Big Foot Rafting at Willow Creek where we met our guide: 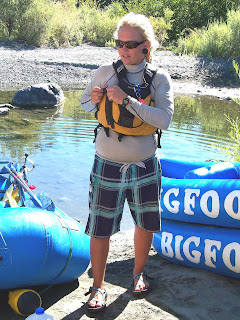 Laura, ex-army college student, with blonde dreds and ear plugs (not the hearing kind).  She was a good guide, and at the minimum kept me from doing anything stupid.  Based on her conversation with John she has a deep interest and abiding affection for IPAs. 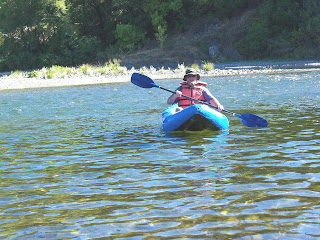 We had the whole famdamily, well mostly.  John, and Mary, their sons Byron and Vince, and Byron's kids Duncan and Jasimine.  We had one raft and two yaks to carry us all down a 10 mile stretch of the Trinity River from Willow Creek to a pull out on the Hoopa Indian Native American Reservation.  That's Byron on the left in one of the yaks. 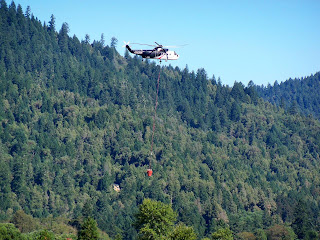 There is a major fire burning a few ridges over and the helicopters are busy carrying water to be dumped on the fire.  Here's one lifting a bucket of water to take and dump. 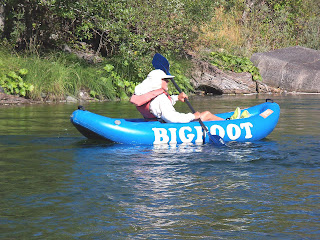 Grandpa John in one of the two yaks.  I spent about 3/4 of the trip in a yak, which limited my photography.  For example, we saw a bear briefly, peering over the rock at us, who ducked back when we failed to offer him the customary chocolate bar. 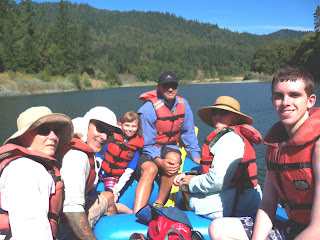 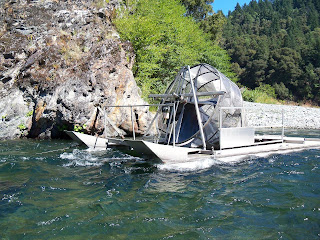 A "screw trap" fish counter, used by the Hoopa tribe's fisheries managers to count the fish passing by.  Fishing and fish rights are a big bone of contention in the Trinity, with the natives, sportsmen and commercial fishermen all trying to claim a share of the salmon and steelhead runs. 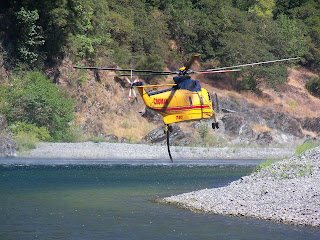 Something unusual happened.  A chopper set right down in front of us to pick up a load of water to drop on the fire.  The choppers have the right of way, but it wouldn't have mattered; the wind from the chopper would have blown us back upstream. Instead of a bucket, this one had an external tank and a suction hose.  He made this run all day at 10 minute turn around. 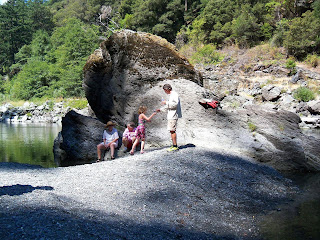 We stopped at lunch on a sand bar.  Ham and cheese sammy's and drinks (water, soda and athletic drinks) provided by the rafting company. 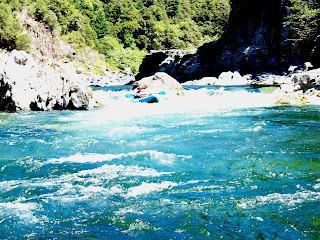 I navigate my first (or was it second - I can't tell from the photo) Class 2 rapid. I wasn't especially graceful, but I made about 7 miles without dumping the kayak.
Posted by Fritz at 11:29 PM

Email ThisBlogThis!Share to TwitterShare to FacebookShare to Pinterest
Labels: boating, Me