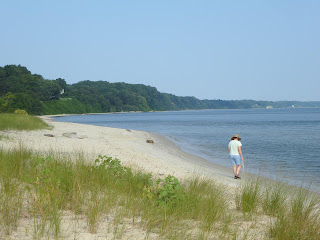 And yet another glorious morning at the beach.  The temperature and humidity are creeping up slightly again, but they were still in the "excellent" range. 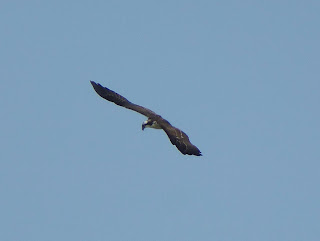 The Ospreys and Eagles were out, but mostly well off the beach, although this Osprey strayed in pretty close. 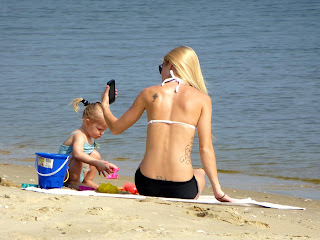 She obviously did not forget the phone.  So what's up with the tattoo on her side (the others seem strictly decorative)? 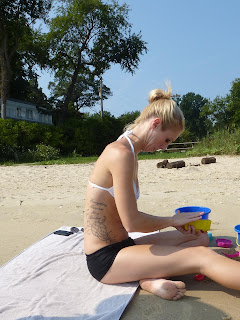 "Everything Happens for a Reason"

I don't believe that, except to the extent that I think everything stems from physical causes, even if we can't see or measure them.  I certainly wouldn't have it in-scrolled on my side in indelible ink, but hey, it isn't my side. 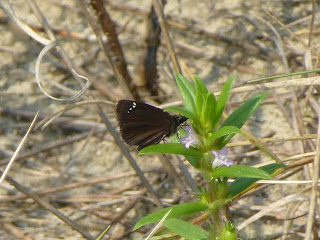 I even found a new butterfly, up in the dunes, feeding on some sort of small flower, which I may attempt to figure out later.  I'm going to tentatively call it a "Common Sootywing" (Pholisora catullus) until I have www.butterfliesandmoths.org identify it for sure.  It's one of the open winged skipper group, that I haven't found many of yet. 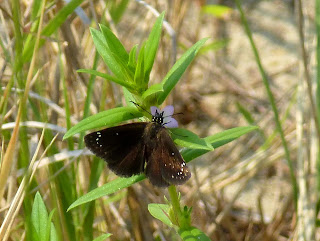 Skippers fall into two groups, the closed wing, and the open wing.  The open winged ones do sit with their wing open frequently like many other butterflies, unlike the closed wings, which either fold them overhead, or sit with the classic "half open" double wing presentation of many skippers.  I was fortunate to be able to get two half decent shots of the both the upper and lower surfaces of this one butterfly. 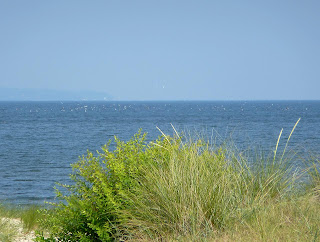 After we left the beach, and were talking to a friend in the harbor, these gulls began diving on fish at the surface.  I'm pretty sure they are very small stripers (8-12 inches), but I may have to go find out soon...
Posted by Fritz at 1:44 PM