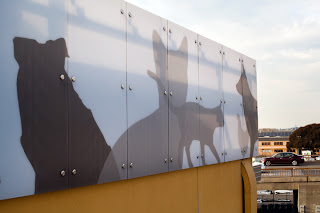 While most new structures built using city bonds are decorated with public art, Berkeley’s new $12.4 million animal shelter is not. City staff skipped out on the municipally-mandated public art process during construction and the reasons why remain difficult to pin down.

Since the project’s inception in 2002, shelter plans ran into a range of obstacles, from difficulty finding an appropriate site to a series of cost overruns. As a result, said Deputy City Manager William Rogers, the city decided not to set aside $142,500 of its budget for public art, despite a Berkeley ordinance that requires municipal projects to do just that.

Others familiar with the project said the decision not to include public art in the shelter was due to a failure to put the proper language in the bond measure that funded construction. Whether that was an oversight or an intentional decision to ensure flexibility in the project budget is unclear.

“I don’t know why the bond measure didn’t include an art requirement,” said Rogers. “But what I know is we basically put the dollars into animal care and the facility so we could do things like prevent transmission of disease so fewer animals need to be euthanized. And we ended up with a state-of-the-art facility that’s absolutely in the best interest of the animals.”

A wise choice.  I like dogs and cats, but I've never noticed them to be trenchant art critics.