We Visit the Marine Museum 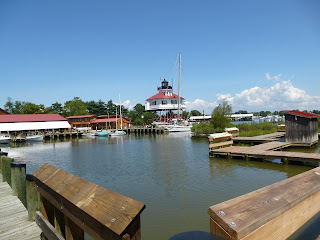 In an effort to see something exciting in Calvert County, Alex, Kelly and I decided to visit the Calvert Marine Museum, down on Solomons Island, which neither Alex nor I had seen in several years, except for concert nights. 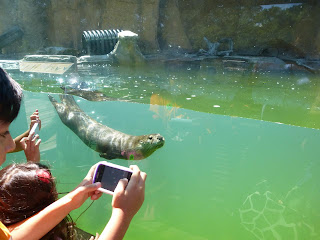 After a run through the fossil displays (a very impressive collection which I envy), and the aquarium (very nice aquaria, but a very limited selection of fish, due to the limited number of fish in the middle Chesapeake Bay), we came out to the otter exhibit.  The otters were having a good time, and many photos were taken. 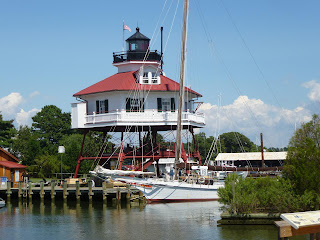 The Drum Point Lighthouse.  Originally located on Drum Point (obviously) at the mouth of the Patuxent River and the Bay, it was moved intact to the Marine Museum in concert with the building of the Thomas Johnson bridge across the Patuxent between Calvert and Saint Mary's Counties. 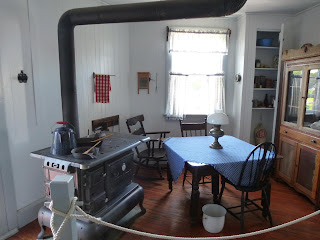 The lighthouse was open for visitors, so we went up and through the house.  It has three stories (if you count the little room with the light at the top).  It's well furnished now, and looks like an attractive vacation cottage inside. 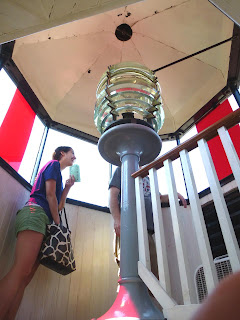 Kelly and Alex up in the top, with the light.  Originally an oil lamp which needed to be tended regularly, it's currently equipped with an electric incandescent light. 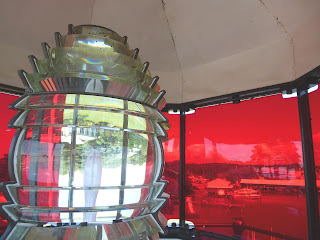 Another look at the light.  The red windows were there to warn people of dangerous sectors in the original location. 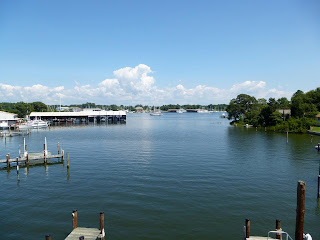 A view of Solomon's Harbor from the second floor of the lighthouse.
Posted by Fritz at 8:58 PM