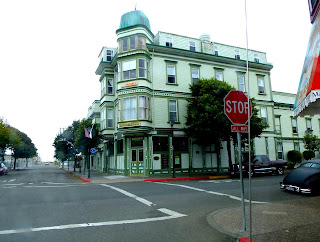 Today's extravaganza was a trip cruise on Humboldt Bay, sponsored by the Humboldt Baykeeper Society.  For the promise of a donation (to be made later), the Baykeeper provides a guided trip aboard their boat for about 1 hr.  On our way through Eureka to the dock we passed by the old hotel that Georgia and Mary's grand parent ran as a hotel and boarding house, the "Buon Gusto," originally, and now called the "Eagle House" 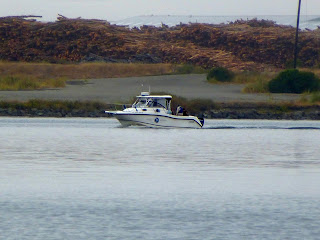 The Baykeepers boat, a nice twin 115 hp engine Boston Whaler, about 25 ft (without bothering to check).  A decent boat for offshore runs on this coast in good weather.  Like that happens... 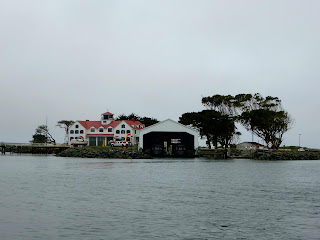 The Coast Guard Station at Humboldt Bay.  I'm sure they have their work cut for them. They did when I lived in the area. 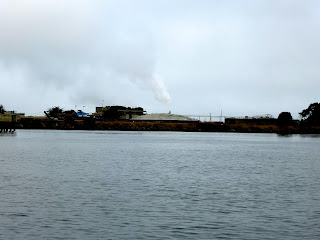 The pulp mills in Samoa, that dominated the scent in the old days are shut down, and mostly empty; the plumes in the back are from biomass burning power plants.  The timber industry is still big here, and there's lots of wood waste to burn. 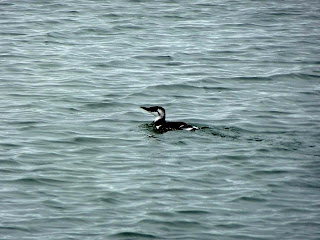 
A chunky Pacific seabird, the Marbled Murrelet is unique among alcids (puffin relatives) in nesting high up in large trees in coastal forests. Little-known until the past few decades, it now is thought to be seriously threatened by logging. 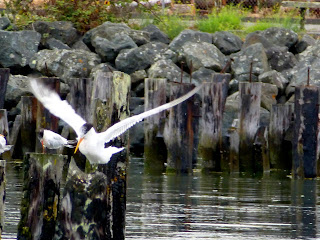 Elegant Terns are a short seasonal visitor here on their migrations from South America to California:


A medium-sized tern with a shaggy crest and a long, slightly drooping orange bill, the Elegant Tern is seen along the Pacific Coast. After nesting in very southern California and Mexico, it wanders northward to northern California, or even to British Columbia. 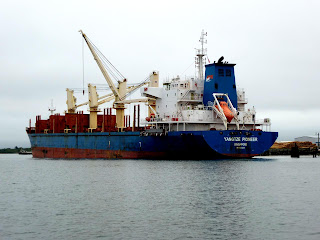 As I said, wood is still big business here, and this is a Chinese boat being loaded with immense stacks of raw, but debarked timbers.  You can see the wood pile to the right, behind the ship. 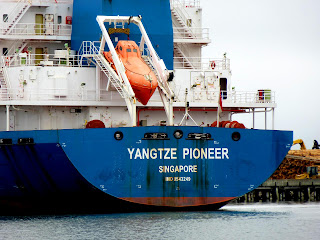 An interesting launch platform for the life boat.  I presume it swings out; but if not, what a thrill ride! 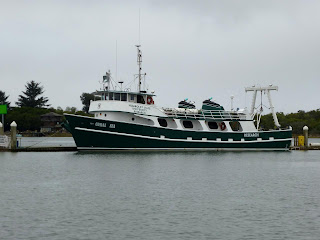 Humboldt State's current research vessel, the R/V Coral Sea,  a substantial improvement over the ships they had when I attended, the R/V Catalyst, which sunk one day off Trinidad.  Who knows, I might even have fished over the wreck... 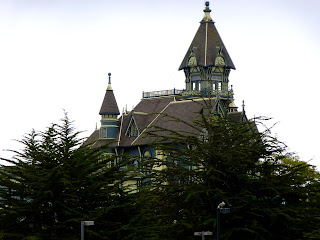 The Carson Mansion is a large Victorian house located in Old Town, Eureka, California. Regarded as one of the highest executions of American Queen Anne Style architecture, the home is "considered the most grand Victorian home in America."It is one of the most written about and photographed Victorian houses in California, and perhaps, in the United States. Originally the home of one of Northern California's first major lumber barons, it has housed the Ingomar Club, a private members-only club, since 1950. Although the front and south-side elevations may be viewed easily from the public street and sidewalk, the home and grounds are never open to the general public.

I made it inside once, for an anniversary party for one of Georgia's aunts.  It's as ornate on the inside.
Posted by Fritz at 11:28 PM

Email ThisBlogThis!Share to TwitterShare to FacebookShare to Pinterest
Labels: birds, boating, education, Me