News From the Home Planet 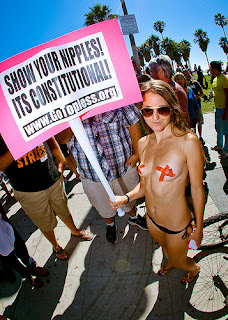 Raëlians Rally for the Right to Go Topless at Venice Beach

And by topless they mean wimen...

The 6th annual “Go Topless Day” will be held in Venice Beach this afternoon starting at 2:30! The event, hosted by the Raelian Movement, is part of a nationwide day to celebrate “topless equal rights” (and gain media attention for the Raelian Movement).

You may remember that the Raëlian religion was found by  French former automobile journalist and race car driver Claude Vorilhon, who either believed, or wanted you to believe that humans were created by an extra-terrestrial race called the Elohim (which sound suspicisously like the Eloi), who then came to us as angels and/or gods.  The religion is organized a bit like Amway, with seven levels of advancement, conveniently labeled zero through six, with zero being trainees, and six the "Guide of Guides."

I'm OK with the idea of women having the right to go topless as they wish, although there are some cases that it might fall into the same category as second hand smoke; permissible if undesirable. However, the Raëlians seem to choose good examples for their educational activities. 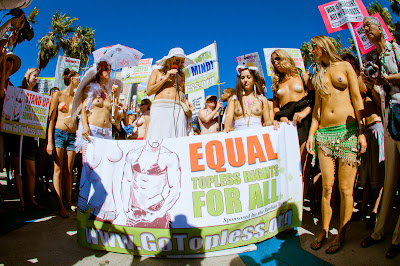 Found at the American Power Blog, by way of Theo's.

UPDATE:  It appears some Kunuckistanians (or should that be Kanuckleheads?) got into the topless protest too.  At least it's reasonably warm in Ottawa in August.  They should try in March.

Wombat-socho must be taking his Metamucil; he's back on schedule with "Rule 5 Sunday: Short Skirt/Long Jacket", his weekly compendium of Rule 5 links.