Bald Eagles Not an Unmixed Blessing

It turns out that giant charsmatic predatory birds do what predators do, kill things:


The recovery of bald eagle populations in Oregon is an environmental success story that has resulted in a resurgence of this iconic symbol in the state, which is good news – unless you happen to be a common murre living at the coast.

Scientists at Oregon State University who are studying the seabird have documented how the increase of bald eagles – especially along the central Oregon coast – is having a significant impact on the murre’s reproductive success. It is developing into a fascinating ecological tale of which the ending has not yet played out.

What has happened, the researchers say, is that bald eagles have taken up a seasonal residence near Yaquina Head and forage on the murres, which have a major nesting colony there. The predation of an occasional adult murre isn’t the issue, the researchers point out – it is the encroachment of “secondary predators” that is having a negative impact on the murres’ reproductive success.

“An adult eagle that swoops down and grabs an adult murre may disrupt the colony for a minute or two, but things get back to normal rather quickly,” said Robert Suryan, an OSU seabird expert at the university’s Hatfield Marine Science Center. “The problem arises when the eagles – especially juveniles that are not yet accomplished hunters – land on the colony and send the adult murres scurrying. 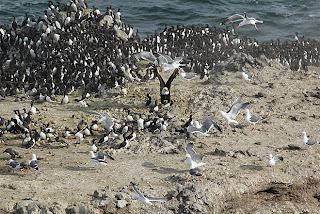 Stupid teenage eagles, twerking and raising a ruckus, and generally ruining the hunting for adults.  But why is this a big problem?


“That opens the door for brown pelicans and gulls to come in and grab the eggs, or even the murre chicks, and the results are pretty devastating,” Suryan added. “They literally will destroy hundreds of eggs in just a few minutes.”
...
Cheryl Horton, an OSU graduate student working with Suryan on the project, said the eagles affect the colony in other ways as well.

“When juvenile pelicans or eagles land on the rocks, all of the birds scatter,” said Horton, a master’s candidate in fisheries and wildlife. “We documented some 300 murre chicks that washed up dead on the beach last summer after a single pelican disturbance. They no doubt panicked and slipped off the rock and weren’t yet able to swim.”

So it's really the Brown Pelicans?  Curiously, both Bald Eagles and Brown Pelicans have rebounded from endangered status to healthy populations since the banning of DDT in the United States.   Good days to be a murre, eh?

I think Oregon needs more Ospreys for the eagles to rob, to spare the murres the trouble.
Posted by Fritz at 5:00 AM