You can always tell when the memo goes out that it's time to scare people again.  Today three different stories appeared in the Chesapeake Bay news feed about the threat of rising sea levels:

California’s Bay Area can expect sea levels to rise by up to 55 inches by the end of the century, putting an estimated 270,000 people and $62 billion [PDF] worth of San Francisco urban bling at risk of increased flooding. That presents a major challenge to the three-mile stretch of San Francisco’s downtown Embarcadero district, which features more than 20 historic piers, a bulkhead wharf in 21 sections, a seawall built in the late 1800s, and the iconic Ferry Building, fully commissioned in 1903. California’s seasonal king tides already overflow San Francisco’s sea walls and occasionally spill into the Embaracadero, providing a preview for what might happen more regularly if sea levels continue to rise.

Here's the reality of sea level rise in San Francisco.  Two millimeters per year, constant since at least the early 1900s, probably back to the Civil War, and no evidence of recent acceleration of the rate. 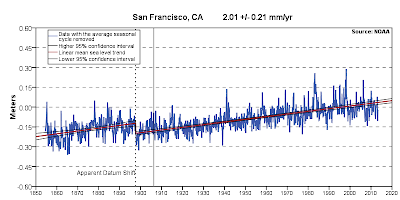 To get 55 inches by the end of the century, the oceans would have to rise dramatically due to melting ice.  Unfortunately (for the hypothesis, not San Francisco), the globe has not warmed significantly in the last 16 years.

#2 was The Battery, New York. I've featured it before.  As sea level has risen, Manhattan has expanded.  That's what they have earth movers for.
#5 was Annapolis MD.  Sea Level is rising a little faster in MD than in California, largely because the land is sinking instead of rising, but again, no evidence of a recent increase in rate. 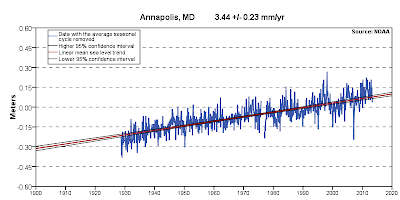 and the third story: 800 miles of Md. roads would be affected by sea level rise


Gov. Martin O'Malley warned in December that rising sea levels over the next century would threaten "400 miles of roadways," when he signed an executive order making protection of billions of dollars in state infrastructure a top priority.
...Maryland is home to more than 5,200 miles of state roads and about 21,000 miles of county roads, according to Maryland State Highway Administration documents.

A CNS analysis found that roughly 800 miles of roads would be affected if sea levels rise another 2 feet. At 5 feet, an estimated 3,700 miles would be under water. The bay already has risen more than a foot in the last century, and scientists predict it will rise 2 to 5 feet before the end of the next century.

Again, at this point, a prediction of greater than 1 ft per century, the long-term historic rate, is completely speculative.

Yes, when you make a road, you fix the height of that span.  Sea level rise will, at some point, reach a road placed at low levels.  People adapt. You either give up and use boats (like Venice, Italy) or you build up the land (like Manhattan).
Posted by Fritz at 9:28 PM