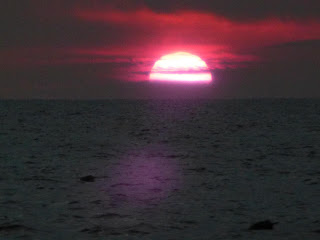 I took advantage of a "Walk-On" day with Walleye Pete to take another trip to the Maryland Eastern, after I had such a great trip a little over a week ago.  As of last night, the forecast was calling for 5-10 knot northwest winds, which would be favorable.  We set out from Buzz's Marina with a full boat just a little before the sun rose above the horizon. 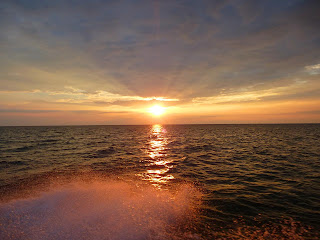 The wind was already a little higher than predicted when reached the Bay. 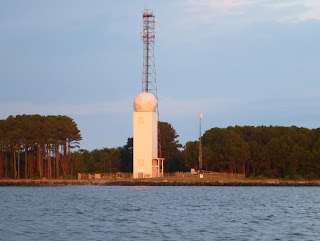 We lingered on the western shore a while, checking a few structures for fish, and hoping for the wind to slack before heading to the other side 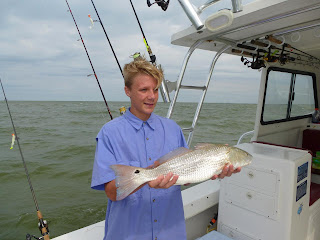 Fishing was tough.  The wind was howling at 15-20, with 3-4 foot chop all 16 miles way across the bay from Point Lookout.  Once there, the islands offered only a little protection against the wind, and the drift was fast and tough.  We caught only two Speckled  Sea Trout (specks) for the day, barely avoiding Pete's dread Speck Skunk, but this young man persevered despite a bout of seasickness on the way over, and caught this nice Redfish near familiar structure (below). 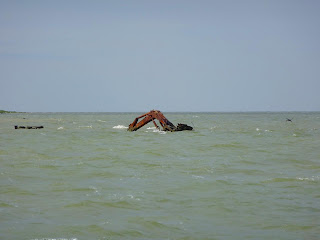 Pete called it a lost day around noon when the wind failed to fail, and beat our way back west around noon.  Once on the western side, with a little little shelter from Pt. No Point, we tried some shoreline spots, with nothing for our efforts but some croaker and some chopped tails. 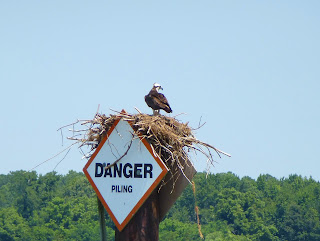 If you wanted to see birds, not a bad day.  St. Jerome's Creek is Osprey central.  I saw some Oyster Catchers over on the other side, and the usual compliment of gulls, terns, cormorants, pelicans, as well as a few pairs of Bald Eagles on the west.
Posted by Fritz at 7:25 PM