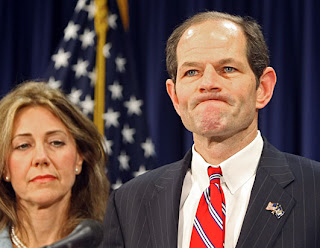 Eliot Spitzer feared his daddy would find out about his hooker habit, according to his rival in the city comptroller’s race.

And since Daddy's money has been the foundation of Spitzer's political campaigns, that could be a bad thing.  And besides since Daddy was paying, he might want a slice of the action.


Kristin Davis, the famed “Manhattan Madam,” told The Post she first met then-Attorney General Spitzer in 2005 when he became a customer of her prostitution business, then called Dream Girls.

Davis said she got an urgent call from her booker: “Look, there’s a client here, a $1,300 appointment, and the girl’s running late. He refuses to wait outside. You’re going to have to let him in or lose the call.” 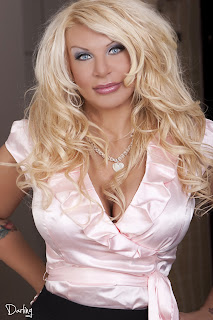 
Davis hustled to her apartment in the 57-story Corinthian on East 38th Street, which doubled as a brothel.

“He told me he was an attorney,” Davis said. “He told me the reason he didn’t want to wait outside was because his father had developed the building. The staff knew him.”

Bernard Spitzer, a real-estate titan and philanthropist, erected the building in 1988.

Davis, who managed the hedge fund Bisys before switching to the oldest profession, took the occasion to dish about her alleged dealings with the disgraced ex-governor, who resigned in 2008 when the feds caught him frequenting a prostitution ring, the Emperor’s Club VIP.

One of the girls he preferred, Ashley Dupre bandied her labor with Spitzer into a Playboy gig (NSFW link), a sex columnist spot for the New York Post, and a possible singing carrer.


Davis maintains she supplied him with prostitutes on a weekly basis for five years. He paid cash and used such aliases as “ES,” “James” and “Bill Gray,” she said. Officials reportedly also found records linking him to Davis’ service.

Weekly at $1,300 a pop? Do the math!  Either Daddies allowance was exceptionally generous, or New York pays it's Attorney Generals way too much.


While Spitzer was polite in that first encounter, Davis said, she later blackballed him as a client twice when he racked up complaints from her girls. 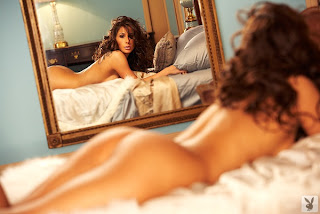 Sounds like he was a real sweetie; but then I guess being the Attorney General and Governor for New York might make you think you were better than a hooker, although history would suggest otherwise.  At least hookers give value for the money they take.

“He was aggressive, trying to force them to do things,” she said. “They felt he was too rough. He was trying to pull your head toward him to make you do things uncovered. You’d say, ‘No, I have to put a condom on,’ only he’s not listening to you. He’s just steamrolling over you.”

The man is just amazing, and not in a good way.  Four years after being tossed out of office for violating the very laws he was supposed to be upholding, he's asking for another position of authority in New York, Comptroller.  And it's to New York's shame that he's getting traction.  But it's their state, and he'll be their problem.


But Davis said Spitzer had a soft side. One of his regulars, gorgeous brunette Irma Nici, once told him she was having her cat treated for cancer. The next time they trysted, Spitzer pulled out an extra $500.

“Here, this is to take care of your cat,” Davis said he told Nici.

So the best any one can say about Spitzer is he likes pussy?


The thing is, the emotional imbalance he showed in Albany had been evident before — as had the narcissistic notion that rules he self-righteously insisted everyone else follow simply didn’t apply to him. (He brazenly violated campaign-finance rules during his first run for attorney general in 1994, and flatly lied about it when asked during his successful run in 1998.)

As a public official, he was shielded from the effects of this for years — largely because in his tenure as this state’s attorney general he made canny use of media leaks on hot-button Wall Street matters that made him a darling of the press and Manhattan liberals.

Wombat-Socho linked at the weekly Rule 5 roundup "Rule 5 Sunday: Pyjamarama" at the other McCain.
Posted by Fritz at 6:00 AM