Or as they are often called, fisherman's tales.
I had a chance to book a "walk on" trip to go fishing with my charter fishing guide friend, "Walleye" Pete Dahlberg, operator of Four Seasons Guide Service. A walk on means you are not chartering the whole boat, but are riding with other fisherman, who you may or may not know, and are splitting the costs.

Pete and I go way back.  I bought his old boat when he turned "pro" in 2000, and have fished with him regularly since.  He and I live in the same neighborhood, so I caught a ride with him in the morning to meet the other fisherpeople at Buzz's Marina in Way Slower Maryland at 6 AM.  There was a husband - wife - son trio who had chartered with Pete previously, and a younger guy, who I knew, although not well.


We headed out more or less on schedule.  It was hot already in the morning, and headed to 90+ in the day.  It takes about 45 minutes of running to get out of St. Jerome's Creek and  cross the Bay to the islands on the Eastern Shore, past Pt. No Point Lighthouse.


A familiar landmark, the drowned backhoe (or is it it a front end loader?) in the waters off the remains of Holland Island.  Holland Island once had a community of some 300 houses, but erosion has all but eaten it up.  The backhoe wa left by the last permanent inhabitant of the Island, whose house was badly damaged in Hurricane Isabel, and recently demolished.  The water has claimed the site. 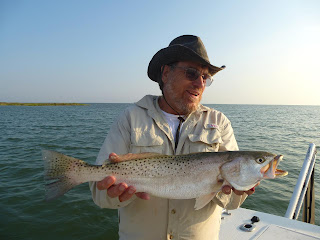 Once, while fishing with Pete, I caught a Speckled Trout right out from under the backhoe. I tried again today, but missed, and left a popping plug on the backhoe... Karma, I guess.

Speckled Trout were the quarry du jour.  Everyone caught a few.  Tackle of the day was various rubber tailed jigs (look in corner of the second photo for an example).  They ranged in size from sublegals (< 14 inches) to about 25 inches, mostly in very shallow water.
We also caught a few small Spot and Croakers, a single barely sublegal Red Drum, a few small Striped Bass, and a Bluefish.  I was really impressed with the Speckled Trout fishing, as ordinarily it is a relatively rare fish in the Bay, but recent years have seen a resurgence of their numbers.

We hit a number of Pete's "special" spots, and caught Speckled Trout at most, but not all. Speck fishing is all about tide and time, and it's important to be at the right spot at the right time.


The land here, such as it is, is right out of Michner's "Chesapeake" or rather, his book came out of the Eastern Shore, and it's small, constantly eroding islands, and communities centered on the water.

The American Mariner, also known as the target ship.  One of two old ships towed onto to shoals of the Middle Grounds, and used for target practice for years by the US Navy.  The other ship lays nearby, completely underwater, still providing structure.  The Mariner's name is still visible on it's bow.
Posted by Fritz at 9:02 PM