The plan, to be released Thursday by Gov. Martin O'Malley, also requires that more of the state's electricity come from renewable sources by 2020.

And just what renewable sources is he talking about?  Wind and solar?  Both are substantially more  expensive than the fossil or nuclear energy that provides the bulk of Maryland's power currently. 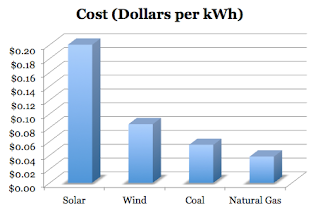 So O'Malley is planning a double whammy on Maryland residents, higher energy costs overall and energy from more expensive, and land hungry sources.


Maryland's goals for reducing greenhouse gases are among the most ambitious in the nation. The plan requires stricter measures than previously proposed to meet the requirement set by the General Assembly in 2009 to cut carbon emissions that scientists say drive climate change.

"Although it might seem high, it's really the first step, the first down payment that we need to make in order to avoid a real climate catastrophe in the world," said Donald Boesch, president of the University of Maryland Center for Environmental Science.

Of course, the relative amount that the Maryland's energy cut backs will reduce climate change, even assuming the worst of IPCC's models is trivial and if the rest of the country were to follow suit, would hardly be any better.