Did Civilization Just Dodge a Bullet?

The earth barely missed taking a massive solar punch in the teeth two weeks ago, an "electromagnetic pulse" so big that it could have knocked out power, cars and iPhones throughout the United States.

Two EMP experts told Secrets that the EMP flashed through earth's typical orbit around the sun about two weeks before the planet got there. 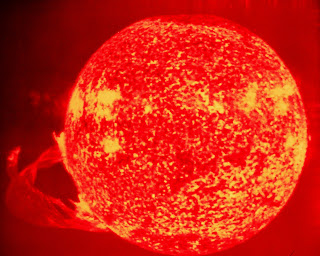 "The world escaped an EMP catastrophe," said Henry Cooper, who led strategic arms negotiations with the Soviet Union under President Reagan, and who now heads High Frontier, a group pushing for missile defense.

"There had been a near miss about two weeks ago, a Carrington-class coronal mass ejection crossed the orbit of the Earth and basically just missed us," said Peter Vincent Pry, who served on the Congressional EMP Threat Commission from 2001-2008. He was referring to the 1859 EMP named after astronomer Richard Carrington that melted telegraph lines in Europe and North America.

"Basically this is a Russian roulette thing," added Pry. "We narrowly escape from a Carrington-class disaster."

I wonder about this.  Solar activity is pretty widely observed, and if a Carrington level event had occurred, even aimed elsewhere than earth, I'm sure suspect  it would have been more widely reported. A Carrington level event could seriously damage civilization as we know it, by disrupting our connections to YouTube and cable TV, as well as much of our power grid.  But the fact that this article is sourced to CIA and similar outfits looking for support for protection from EMP attack makes me suspicious that there may have been some exaggeration taking place.

Estimates are that "Carrington" level events happen approximately twice per millennium (they leave traces in ice cores), and events one fifth as big every century.  However, given Earth's relatively small size compared to the Sun, and the directionality of solar flares, we're likely to observe quite a few before actually being struck by one.

Since the sun rotates approximately 14 degrees a day, a 2 week miss was a big miss.
Posted by Fritz at 7:50 PM