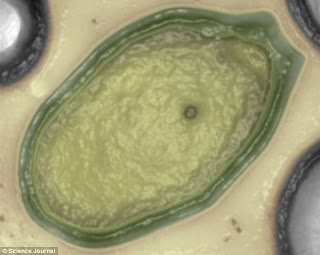 Just like something out of Pacific Rim... which I just may see someday.

Scientists have found a new virus thought to be the biggest ever seen on Earth.

The virus, dubbed Pandoravirus, is one micrometre big - up to ten times the size of other viruses - and only six per cent of its genes resemble anything seen on Earth before.

This has led French researchers to believe the virus may have come from an ancient time or even another planet, such as Mars.The giant virus is only found underwater and is not thought to pose a serious risk to humans.

I find it highly improbable that these viruses originated on Mars.  If they had originated and evolved entirely separately, it would be virtually impossible for a virus to capture and co-opt the cellular machinery of an terrestrial organism, like other viruses do.  Speaking of which, how do these viruses get by?


They took the samples to their laboratory and put them in a solution packed with antibiotics in an attempt to kill any bacteria present.


These bacteria-free samples were then exposed to amoebas knowing that if they died, there must be something else in the samples killing them. This proved to be successful and large amounts of Pandoravirus were spawned.

They infect amoebas.  I don't see why that would make them be especially big, but there may be a good reason.  My guess is that these represent a fairly old and primitive branch of viruses, something half way between a bacterium and a virus.  It's difficult to see how viruses evolved, and three hypothesis have been advanced:


Viruses may have once been small cells that parasitized larger cells. Over time, genes not required by their parasitism were lost. The bacteria rickettsia and chlamydia are living cells that, like viruses, can reproduce only inside host cells.


Some viruses may have evolved from bits of DNA or RNA that "escaped" from the genes of a larger organism. The escaped DNA could have come from plasmids (pieces of naked DNA that can move between cells) or transposons (molecules of DNA that replicate and move around to different positions within the genes of the cell)


This is also called the virus-first hypothesis and proposes that viruses may have evolved from complex molecules of protein and nucleic acid at the same time as cells first appeared on Earth and would have been dependent on cellular life for billions of years.

I can imagine the large viruses originating from infections cells, and not having lost so much as to become like the smaller, more simple viruses.  Perhaps it has to do with the nature of the environment they "live" in, or the type of organisms they infect.

Anyway, it's a neat finding.