To Not Speak Ill of the Dead...

can be a tough job, but Stacy McCain manages, by avoiding her name:

An Entirely Random Observation About Etiquette and Dead Jew-Haters


There are occasions when good taste requires that polite people say absolutely nothing about the latest news. Just in case such an occasion should ever occur (he says, in an entirely random and coincidental way), you should be prepared. It is important never to say the name of the recently deceased Jew-hating liberal hag, because that would not be polite. So I must sharply admonish Jeff Dunetz, who seems to have forgotten the requirements of decorum and propriety, and who also posted this memorably tasteless video:


I'm sure some liberal friends would be aghast at my jumping on the MSM bandwagon and singing her praises to high heaven, but then I remember how most of them reacted to the death of Andrew Breitbart. For example... 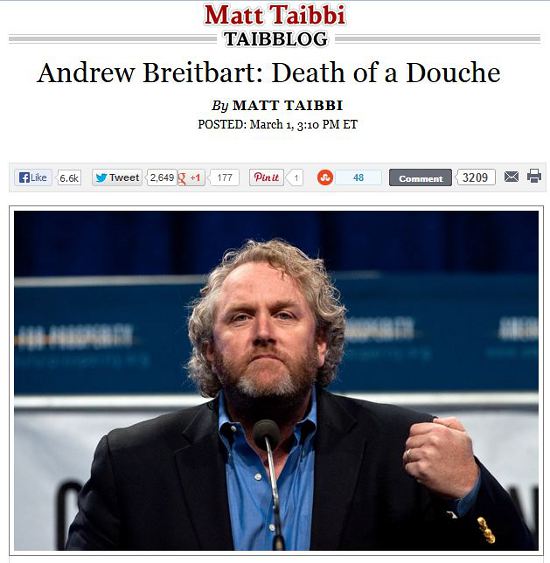 So Andrew Breitbart is dead. Here’s what I have to say to that, and I’m sure Breitbart himself would have respected this reaction: Good! Fuck him. I couldn’t be happier that he’s dead.

I say this in the nicest possible way. I actually kind of liked Andrew Breitbart. Not in the sense that I would ever have wanted to hang out with him, or even be caught within a hundred yards of him without a Haz-Mat suit on, but I respected the shamelessness. Breitbart didn’t do anything by halves, and even his most ardent detractors had to admit that he had a highly developed, if not always funny, sense of humor.

I will not unilaterally disarm.
Posted by Fritz at 6:38 PM