in bullshit? WAPO has another scare story on potential sea level rise. I would like the opportunity to place this in some context.


It was scary enough that a team of experts on sea-level rise projected that Maryland’s coastal waters could rise to six feet in this century. But to hammer home the findings of a new report, they included a link to a Web tool that allows readers to make like a god, sliding a scale over pictures of state landmarks until a creeping tide washes them away.

Maryland, with 3,100 miles of tidal shore along the Atlantic Ocean and Chesapeake Bay, is one of several states, including Virginia, Delaware, Louisiana and Florida, most vulnerable to sea-level rise pushed in part by global warming that has caused glaciers to melt and oceans to expand.

Like the of the world, Maryland is experiencing a sea level rise of roughly 2 mm per year, plus an additional 1-2 mm/yr due to subsidence of the land. 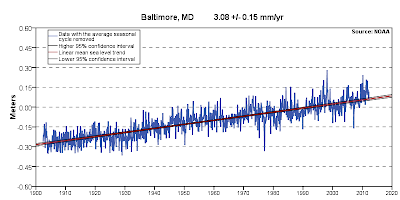 This has been approximately true since the great rising of the seas at end of the most recent ice retreat from the last great glaciation: 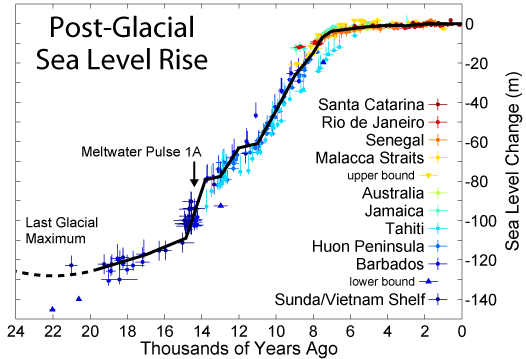 At 3 mm per year, the projected sea level rise for Maryland (using the Baltimore figure above) is about 12 inches, or 1 foot per year.  Any more than that requires a "new" source for rising sea levels.  This, of course, is invoked using "global warming."


Coastal sea-level rise for Maryland will range from slightly less than a foot to more than two feet by mid-century, and from two to six feet by the end of the century, depending on numerous factors, including glacial ice melt, according to the projections in a recent report from the Maryland Commission on Climate Change.

We do see that their predictions include the "no change" scenario, although they downplay it mightily.  However, the predictions they like to feature are the extreme increases of 2 to 6 times the current rate of sea level rise.  Unfortunately for the hypothesis, global warming has been in hiatus for 12-18 years, depending on which data set you choose, and how loose your criteria for warming are: 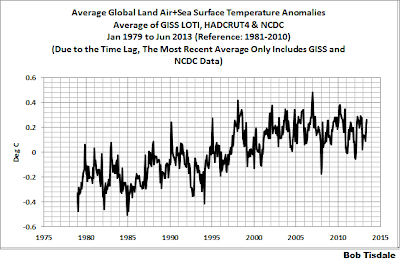 They helpfully provide this graphic showing the relative "vulnerability" of Maryland land to sea level rise: You will note that the vast majority of the threatened land is on Maryland's Eastern shore.  If you knew the region, you would be aware that most of land in blue is salt marsh.  Allow me to show my own photo of one of those islands in blue, near high tide:

On an extreme high tide (probably at least twice a month, on the full and new moons) that marsh gets covered by the Bay.  The marsh itself grows to match sea level rise, and has for a very long time, since the sea level rose to meet that land it at the end of the ice age.  It rises by the accretion of dead grass, mixed with sediment caught by the detritus, forming a sod or eventually, peat.  Interestingly enough, the increase in CO2 may help some salt marshes to grow faster and resist the rise of sea level.


The major threat to salt marshes is not sea level rise, but rather erosion from the edge.  You can see the steep edges where waves have broken off chunks of the sod.

The way that this land can threatened by sea level rise is anything that destroys the ability of the marsh to regenerate itself.  Building roads and houses is one.  Any such fixed structure will be eventually overwhelmed, assuming sea level rise does not cease as we plunge into another era of ice advance. Or if, as is common, fires are set to clear the marsh, sufficient grass is not left to form the sod.  Or, an invasive species (in Maryland's case, the nutria) can eat enough to keep the marsh from renewing itself. 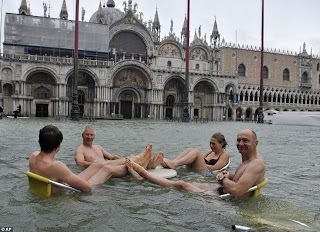 Yes, human habitation on the Eastern Shore is threatened by the Bay, but new sea level rise beyond what we've experienced over the past 400 years is not really the issue.  The shore will continue to erode, and land taken out of marsh will be swallowed.  It has happened before, and it will continue. People will adapt or leave.  For two models of adaption, consider Venice, Italy, and Manhattan Island, New York.

Venice was built on such islands over a thousand year ago.  No trace of the original islands is visible in Venice proper; they have all been covered with buildings built on pilings in the mud, including the great Cathedral of St. Marks.  Sea level rise now threatens those buildings, because the islands can't grow up any longer.  The only choice is to build higher.

Manhattan Island has been an important city for the colonies and the United States for 400 years.  How has it fared in the rising seas?

Answer; it has grown.  Not by salt marsh, but by human intervention.  The land was so valuable that people chose to make more of it.  I doubt they even considered the rising sea levels when they added land.  They just knew they wanted more of it.

Personally, I think the town on the Eastern Shore should consider the Venice model, but it's not mine to decide for them, it's theirs.
Posted by Fritz at 9:33 AM