George Zimmerman acquitted by a jury in Florida


"Well, I think that this is an atrocity," said Sharpton. "I think that it is probably one of the worst situations that I've seen. What this jury has done is establish a precedent that when you are young and fit a certain profile, you can be committing no crime, just bringing some Skittles and iced tea home to your brother, and be killed and someone can claim self-defense having been exposed with all kinds of lies, all kinds of inconsistencies. ... Even at trial when he is exposed over and over again as a liar, he is acquitted. This is a sad day in the country. I think that we clearly must move on to the next step in terms of the federal government and in terms of the civil courts. Clearly, we want people to be disciplined, strategic. But this is a slap in the face to those that believe in justice in this country."

NY Giants WR Sends Threatening Tweet: 'Zimmerman Doesn't Last a Year Before the Hood Catches Up to Him' 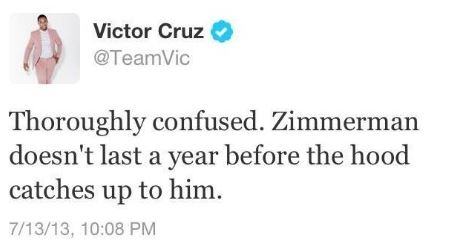