We (or at least I) don't tend to think of Flash floods as threat in the Chesapeake Bay.  I have a cousin who is a rancher in Arizona.  One year his Christmas letter included a paragraph on how he was caught in a flash flood in a gully while tending his cows (his daily commute involves a horse, and very little traffic) and nearly drowned.  Another year, it was a snake bite. (This is the same crazy cousin who, when we were teenagers and young adults) would catch live rattlesnakes by hand, by stomping on them barefoot and pining them.  I always thought the snake loop was a much better approach.

But I digress; this is supposed to be a comment on an article about how flash floods in the Chesapeake Bay watershed pose a danger to the Bay (to heck with the people, there's plenty of them): 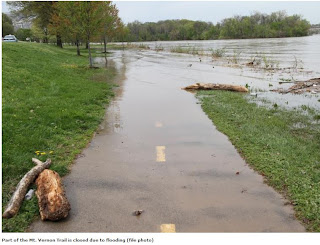 Flash Floods and the Ecology of Local Waterways

So far this summer, Arlington has been subject to flash floods and flash flood warnings. While flash floods are obviously harmful to those who live in or are trying to navigate through a flooded area, the floods can actually be harmful to the ecology of the flooded waterway itself.

A flash flood is a weather condition defined by the National Weather Service as “a rapid and extreme flow of high water into a normally dry area, or a rapid water level rise in a stream or creek above a predetermined flood level, beginning within six hours of the causative event.” In other words, a tremendous amount of water in a short amount of time caused by thunderstorms or heavy rainfall.

These types of storms are most common in Arlington during the spring and summer months due to the weather and climate of the area, which explains why the flood threats have picked up recently.

I think this is a rather subtle attempt to blame it on global warming, but it fell a bit flat. It has been a wet summer this year, which is good for my lawn and crops, but, really, it's nothing exceptional for the mid-Atlantic. Any less, and the farmers would be screaming "drought"!

No, it's really a function of the rainfall rate, and the amount of ground covered by impermeable surfaces.  High rainfall rates, and urban areas routinely produce flooding.

The effects of flash floods depend on factors such as the amount of previous rainfall the area has experienced and how much rainfall can be absorbed in the area. Flash floods, therefore, affect all areas and environments differently and there’s no blanket formula to predict how a storm will affect a given area.

Aside from the potential danger presented from this type of extreme weather condition, heavy rainfall and flash floods can have negative impacts on our local streams and surrounding environments.

“When rainfall runs from developed surfaces in Arlington to local streams, it washes any nutrients on the surface into the watershed,” explains WJLA meteorologist and Arlington Public Schools high school science teacher Ryan Miller.

These nutrients can include fertilizer, pet waste, and gasoline, and when they infiltrate runoff heading towards local tributaries, they eventually end up in the Potomac River and ultimately the Chesapeake Bay. Waterways suffer from the introduction of these pollutants which catalyze a harmful process called eutrophication.

Um, that's the first time I've ever seen nutrients applied to gasoline, but I understand.  I think the word they are looking for is "pollutant," a word that covers both nutrients  (things that make plants grow and lead to eutrophication) and toxic materials including organic compounds (like pesticides) and unwanted heavy metals (like lead and mercury).
Posted by Fritz at 6:21 PM